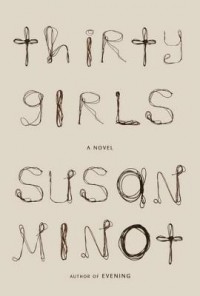 This is one of those books that's sold as a story of atrocities in a little-known country, but that actually focuses on the mundane angst of a visiting American.

Jane is a 38-year-old journalist from New York, who travels to Uganda to recover from a failed marriage. She soon meets the much younger Harry, to whom she attaches herself like a barnacle, obsessing about the relationship while setting out with a group of aimless expats on a road trip to interview children kidnapped by Kony's Lord's Resistance Army. The children include Esther, a teenage girl taken hostage along with most of her Catholic school classmates.

Unfortunately, the book skims over the true drama of Esther's and the other girls' stories, in favor of the mundane details of Jane's trip and her affair; indeed, Esther narrates only a third of the book, for all that it's supposedly about the thirty girls. I suspect Jane's chapters are based on personal experience, because they have the ring of travel stories ("The roads were terrible, and when we finally arrived, what we thought was a hotel turned out to be a brothel! And THEN, we asked someone where to find a hotel, and he offered to let us stay at his house!"). Like many travel anecdotes, they are less interesting than the teller imagines, and the road trip drags on interminably. Even when the group arrives in what we're told is a war zone, all that seems to be at stake for them is who's sleeping with whom.

I don't blame Jane for continuing to inhabit her own life, despite being horrified by the plight of the LRA's victims; it's an honest portrayal of the way most people respond to the suffering of strangers. I do, however, blame the author for using the story of the kidnapped girls as a hook to draw readers in to the dull mid-life-crisis tale of a privileged American. Another expat tells Jane she has a "wild spirit," but this is nowhere in evidence: she's needy, insecure, content to hand over the reins of her journalistic mission to a group of pleasure-seekers she's just met, and ultimately bland. Meanwhile, though Esther's story has a few shining moments, she is so underdeveloped as to come across as little more than a standard resilient victim. The other girls hardly register except as a jumble of traditional English names (is everyone in Uganda really named this way?) attached to acts of violence. Even the deaths of children at the hands of the LRA are rushed; it's only when a white expat is the victim of violence that Minot fully develops the event and its consequences.

As for the writing, Minot does a good job of capturing speech rhythms; I immediately heard the East African accent in Esther's narration, for instance. Her style itself, however.... well, see for yourself:

"Harry turned right down a slope of flattened grass strewn with hulking boulders at the end of which sat a stone house with a thatched roof."

"A sliver of light green pool could be seen at the end of an alley of cedar trees and a gigantic palm tree rose far past the other trees like an exploding firework. Marsh stretched beyond with inky grass markings and black twisted trees. The purple lozenge of the lake lay farther."

Ultimately, this book bored and disappointed me; the story of the kidnapped girls is worthy of a novel but becomes little more than the backdrop against which Jane's identity crisis plays out, and Jane's story lacks the vitality and insight to carry the narrative itself. I recommend passing on this one.