The Last Time I Saw Mother by Arlene Chai 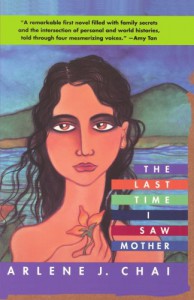 Two stars for "it's okay, but not very good." This novel had potential, but the storyline feels half-baked, bogged down in the life stories of several different characters with identical voices.

Caridad is 40 years old and living as an immigrant in Australia when her mother summons her home to the Philippines to tell her the truth about her parentage. The novel is told in the first person by four narrators: Caridad, her mother Thelma, her aunt Emma, and her cousin Ligaya. Multiple narrators are too common a pretension of debut authors; unfortunately, even experienced authors struggle to distinguish them, and Chai fails to do so here. Had the book been written in third person, more personality might have shone through, though across the board there's little to make these characters stand out. For the most part they're subdued; I enjoyed Ligaya's story most because her emotions are closest to the surface, but the others are quite passive.

Meanwhile, their stories have potential but fail to come to life. If Chai had chosen to focus on one or two aspects of the story rather than covering everything that's ever happened to everyone, it likely would have had more resonance. The most vivid sections discuss the family's experiences during the Japanese occupation and the difficult recovery afterwards; I say "the family's experiences" because too often Chai drifts into textbook-like overviews rather than sticking to the characters' own lives. "The glow could be seen as far as fifty miles away," that kind of thing. As for the big secret about Caridad's origins, it's rather anticlimactic, though the moral dilemma is handled well enough, without idealizing or vilifying any of the women involved. But I found it impossible to believe that in a large and fairly close-knit family, Caridad wouldn't have discovered the secret decades before. It also seemed a little too tidy for the fact of the secret to be the root of Caridad's current marital troubles.

Anyway, there's nothing offensively bad about this book: the writing is adequate, the imagery mostly works, there's a decent sense of place. The secret is a weak framing device, however, and the story and characters on the bland side. Not recommended unless you have a strong interest in the Philippines.