A Passage of Stars by Kate Elliott 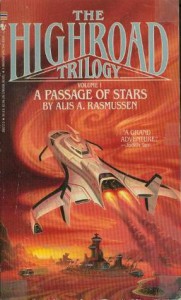 Okay, so I am giving 3 stars, but the real story here is that this is a sci-fi novel—set in space and everything, not just historical fiction enabled by time travel—that I actually sort of liked. It’s been years since I read such a book, and I would not have read this one had I not been familiar with the author’s work (Alis Rasmussen is the real name of the fantasy writer better known as Kate Elliott) and known I could trust her storytelling ability. This is clearly an early work, but it’s a mostly enjoyable story that keeps the focus on the characters rather than the tech.

Lily comes from a family of mine owners on the planet of Unruli, where people live in underground complexes to escape the storms and avalanches on the surface. She’s a restless type and when her martial arts teacher is kidnapped, she sets out to rescue him. From that point it’s a fairly standard adventure novel. Themes and elements I’ve come to expect from Elliott are present here as well: social justice issues and abuse of power; a revolution whose leader we’re not sure we can trust; a world where women are visible and where most of the characters are people of color.

But while Elliott has been remarkably consistent in terms of themes and writing style, the plotting here was too chaotic to get me fully invested. We’re forever meeting new characters who have a lot of potential but drop out of sight after a couple of chapters; everyone but Lily seems to know each other from their complicated, adventurous backstories that are alluded to only in passing; the story is full of competing factions with unclear goals, which remain unexplained even though Lily has plenty of time to ask. The characterization is passable, but too many important characters suffer from excess mysteriousness (the love interest is so weird I spent most of the book expecting him to be the losing prong of a love triangle, but I was wrong). The worldbuilding is handled in much the same way—we see what Lily sees, and have to piece it together as we go—but there it works much better, at least for those (like me) not looking for hard SF.

Overall, an entertaining story with some fun set pieces, probably worth your time if you like the idea of reading about a revolution in space. But there’s just a little too much going on for a book of under 300 pages. I might read the sequel if I happen across a copy, but in the meanwhile I’d recommend Elliott’s Spiritwalker trilogy, beginning with Cold Magic, for a similar story with a tighter focus and better-developed characters.