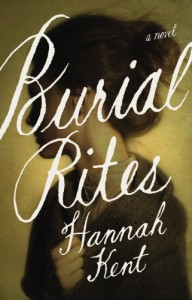 I’ve never known a book with such poorly realized characters to affect me so much. And that, my friends, is my rating in a nutshell. But for those who want more specifics, I will provide them. There will be SPOILERS: it’s pretty hard to spoil a book when the jacket copy tells you the ending, but I do my best.

Contrary to what the title might have you believe, this book—based on a true story—is not about an undertaker but about a woman awaiting execution. It’s set in Iceland in 1829, which means it’s always freezing and people live in squalid conditions and struggle to survive. It also means there aren’t any jails, so after Agnes is convicted of murder, she’s sent to live with a family as their servant while waiting to be beheaded. The family is understandably unhappy about this situation, especially since, as is typical, they and their servants all live and sleep together in one room. There’s also the timid reverend, Toti, who is supposed to harangue Agnes into repentance but mostly just asks questions about her past. Naturally, much of the novel is spent in flashback, as we learn about Agnes’s hard life and the events leading up to the crime.

Certainly a bleak story, but my problem is with the characters and their relationships: alternately inconsistent, unconvincing, and bland. For instance, take this exchange between Toti and a messenger:

“ ‘When he finished Blondal’s letter, he looked up and noticed the servant watching him. ‘Well?’ the servant prompted, with a raised eyebrow.

“ ‘Your response for the District Commissioner? I don’t have all day.’

That’s how a servant behaves toward an (assistant) reverend? Really? Or take the scene where the District Commissioner himself first appears at the family’s home. The older daughter, Steina, has just been established as a cripplingly shy young woman of limited faculties. Then suddenly, she is backtalking the distinguished visitor as sharply and nimbly as many a Spunky Heroine. And don’t ask me where that comes from, because she never does it again. There are too many moments like this, where character motivation or disposition inexplicably goes missing, such that I never formed a true picture of who these people are.

And then there’s Agnes. For the first 70 or so pages, we don’t know who she is; she’s been mistreated and dehumanized to the point that she barely knows who she is, and I found myself caring about her just because her situation is so awful. Once she regains some dignity, though, I started to feel manipulated, because as a character she isn’t that engaging. Kent endows her with standard traits favored by modern authors—a love of reading, a desire to improve herself—and that’s about it. Dare I say, she’s generic. (She also behaves in unconvincing ways, such as going from not wanting to communicate with anyone to spilling her life story to the curious Toti, who does little to inspire trust.) And so the book went for me: I responded to Agnes’s suffering, but I didn’t respond to her. This is a story about suffering (and Kent handles the last chapter very well; in the way Agnes faces her death there’s none of the pious sugarcoating you often see in fiction), so it did affect me. But it didn’t earn those emotions.

One last word on the characters: while Margret and Toti and the girls begin the story with plenty of potential, they never really grow or change except in their feelings toward Agnes. It’s Agnes’s story, but we spend enough time in the other characters’ heads that you’d expect them to have character arcs of their own. They don’t.

On to my other major issue, which is the final reveal of the murders. (SPOILERS. For real this time.) Kent spends the book building toward this point, and in the victim’s cruelty and manipulation we start to see why Agnes might have killed him. Her story seems not to dispute that, but to ask for understanding: “To know what a person has done, and to know who a person is, are very different things,” she says, and this idea is at the heart of the book until nearly the end. It’s a worthy theme; I was on board. And then—surprise!—it turns out she did nothing wrong, at least not morally; she just stumbled onto the crime scene after the deed was done (but botched) and put Natan out of his misery. This failed for me on several levels. Plot-wise, I was promised a murderess, and felt Kent was trying too hard to vindicate Agnes in every possible way: she had an understandable motivation for killing the guy, and she didn’t kill him. Thematically, the case that Agnes is more than her crime is undermined by removing the crime. And structurally, if a book centers on a wrongful conviction, I expect it to focus on why the conviction happened; the crime the protagonist didn't commit matters less than the one society committed against her, but the book delves into that hardly at all.

As for the more technical aspects of the novel, it seems well-researched and there’s a good sense of place. The writing is good enough, although overpraised. At times the author tries too hard: “Autumn fell upon the valley like a gasp,” begins one chapter; having never seen a gasp fall, I found this comparison confusing. But such infelicities are few.

In the end, would I recommend this book? Probably not, because if you’re going to read something this painful, you want it to be excellent. But I’m genuinely glad that other people are loving this story, and don’t regret reading it. I wish it well. But I wish it had been better.