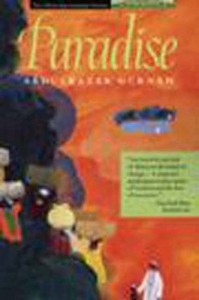 The best description I can give of this book is that it reads like a translation, even though it isn’t. There’s a certain flatness and distance to the writing that I associate with poor translations, and this turned out to be a book I had to push myself through. Fortunately, it’s short.

Paradise is the story of an adolescent boy, Yusuf, in early 20th century Tanzania. Yusuf's parents sell him to a merchant to satisfy a debt, and he spends the rest of the book working in the merchant’s shop and accompanying him on a trading expedition to the interior. And that's the plot in its entirety. Apparently it’s supposed to be a parable, mirroring the story of the Prophet Yusuf (the same person as Joseph in Genesis, unless I miss my guess). Unfortunately, the book is written in a plodding style and Yusuf is a non-entity, without personality or goals to keep the reader's interest. I’ve read interpretations arguing Yusuf was written as a blank state to symbolize Tanzania, which was at a crossroads (we see the beginning of European colonization here, as well as Arab and Indian influences). I suspect that does Tanzania a disservice, however, as no country could possibly be as boring as Yusuf.

I try to give foreign literature the benefit of the doubt, as there’s always the possibility that I just lack the cultural background to understand it, and East African readers would doubtless appreciate this more than I do. There is some story here, albeit a plodding one, and there are sparks of character among the secondary cast, particularly the merchants. While there’s not an enormous amount of cultural detail, the book did put Tanzania on my mental map in a way that it wasn’t before. However, this book completely failed to entertain me, and I found little to appreciate in the writing. (My favorite line: “ ‘I don’t know,’ Uncle Aziz said, shrugging with indifference.” Yes, the shrug had already tipped me off to his indifference.)

In the end, not a book I’d recommend unless you are Tanzanian or are writing a thesis on a relevant topic. For the rest of us, not much to see here.
Tweet