Catherine the Great by Robert Massie 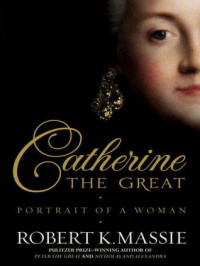 I enjoyed this book a lot: it’s an entertaining and accessible biography that is nevertheless serious and thorough, and with a fascinating subject to boot. Born a princess in a tiny German principality in the early 18th century, Catherine (actually named Sophia, until the then-Empress of Russia renamed her upon her conversion to Orthodoxy) was brought to Russia at the age of 14 to marry the heir to the throne. Unfortunately, her early friendship with her deeply damaged teenaged husband soon soured, and when he ascended the throne almost 20 years later, Catherine soon deposed him and took the throne for herself. She ruled for nearly 35 years, expanded Russia’s territory, attempted with limited success to bring Enlightenment ideas to the country, carried on lively correspondence with philosophers, patronized the arts, and had a lively love life that may or may not have involved a second, secret marriage but certainly included a succession of boy toys in her later years.

Massie gives each part of Catherine’s life its due, from her childhood through the end of her reign; once she takes the throne, he spends more time on the wars and policy issues than her personal life, while still giving space to the latter. Fortunately, many of Catherine’s letters survived, and she wrote a memoir (though hardly a complete one), which allows the author to integrate her own words into the text. It’s quite a history lesson – I learned a ton about Russia and about European politics at the time – but Massie’s writing remains highly readable and entertaining. I read this with as much enjoyment as if it had been a novel. Massie’s take on Catherine is admiring but not hagiographic; it’s clear, for instance, how some of her ideals fell by the wayside as she grew older.

Nevertheless, there are some issues. Massie cites sources only for direct quotations, leaving readers in the dark as to the provenance of his other information. This is particularly problematic when he writes about Catherine’s childhood, drawing distinctions between what she wrote in her memoir and how she “really felt” (how does he know)? While he doesn’t seem to be making any particular argument with the book, he also doesn’t highlight where his interpretation may differ from the mainstream: he may be entirely convinced based on his research that Catherine’s son and heir was fathered by her lover rather than her husband, but it appears this view is not as universally accepted as his treatment of it as uncontroversial fact might have you believe. Finally, he seems too forgiving of Catherine’s failure to do anything about serfdom, though to his credit he does describe its abuses in detail.

All that said, I think this is an excellent biography, both entertaining and educational. And I appreciated the sections in which Massie goes a bit beyond his primary subject: the French Revolution chapter has come in for criticism, but as someone who came into it not understanding how events proceeded there, I found it helpful. Other sections, like the mini-biography of John Paul Jones, seemed a little tangential but were still interesting and helped paint a fuller picture of the times. I would definitely recommend this book to those who enjoy popular history or biography.