In Sorcery's Shadow by Paul Stoller 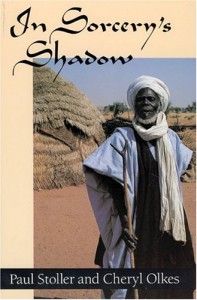 An anthropologist’s memoir of apprenticing himself to various sorcerers in Niger in the 1970s and 80s, this book has great material to work with, but is written in a rather dry, academic style. I had the sense the author spends all his reading time immersed in academic works and perhaps hadn’t actually read a popular memoir, though he clearly did his best to make it accessible by including lots of dialogue and breaking it down into short chapters. There are some storytelling infelicities, like when a major character finally steps over the line near the end, and only then does the author suddenly list all of the major warning signs that had apparently been there all along.

Perhaps my larger issue with the book, though, is that while the author talks a big game in the introduction about this bold move he’s making by putting himself in the narrative at all when he’s supposed to be a scientist, the book is at a rather awkward place halfway between being about him and about the Songhay sorcerers. His life outside of his five trips to the country is a complete blank, such that it’s startling when on the last trip he brings his wife and it turns out people had been asking after her all along; we never knew he was married. But the book doesn’t delve quite as deeply into the lives of the people he meets as I’d like either – what ever happened to the first family of the sorcerer who was imprisoned for 20 years starting when he was 60? And while the author loses his skepticism about Songhay sorcery, he is still supposed to be engaging in academic inquiry and not just some New Agey experience, so I would’ve appreciated it if, for instance, instead of just giving anecdotes of a few people whose problems the sorcerers supposedly solved, he’d put this in context – what percentage of clients saw their problems quickly resolved?

All that said, it’s an interesting book to read – the author seems to have been as immersed in Songhay society as an outsider could be, and he meets some interesting people and definitely provides a window into the country and its landscape and culture. He doesn’t seem to think about his supposedly supernatural experiences very critically, but it was interesting to read about the world of Songhay sorcerers all the same.