A Yellow Raft in Blue Water by Michael Dorris 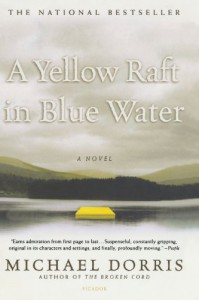 Next time I’m tempted to wax poetic about how great fiction editing used to be, or to worry that a poorly conceived new release is evidence of the profession’s demise, I’ll remind myself of this book. This distinctively 80s mess of unrealized potential and terrible editing choices.

This is a family saga, beginning in Seattle with a biracial teenager, Rayona, whose mother, Christine, suddenly decides they are going back to Montana, to the reservation where Christine grew up. The first large chunk of the book is told from Rayona’s point-of-view, the second, slightly larger chunk from Christine’s, and then a small segment at the end comes from the family matriarch, Ida.

The first mistake is that it’s all told in the first person. It goes almost without saying that all three voices sound the same; first-time novelists love to do multiple narrators and they always turn out this way. But here this is more than a literary criticism; the voice is so jarringly wrong for both Rayona and Christine – who together narrate 80% of the book – that it distanced me from their characters. For fifteen-year-old Rayona – apparently a cautious, sensitive girl – it’s far too detached, ironic, world-weary, mature. And for Christine too – heedless, self-deluding, emotional – it’s too detached, too self-aware. Only for Ida, who really is a tough, bitter, independent, too-old-for-your-shit type, does it work. It took me quite awhile to realize that this disconnect between character and voice was what was throwing me out of their stories. But in the end I think I only got to know Rayona or Christine when not in their heads.

The second mistake is the pacing. At 372 pages, the book is on the longer side for realistic fiction, and it has enough plot for maybe half those pages. Mostly Dorris disguises the lack of forward momentum with – or perhaps loses it in – overly detailed but ultimately unimportant scenes. And the lack of focus, the unnecessary words and scenes, corrode the story both on a macro level and a scene-by-scene one. A five-page scene details Christine’s buying a membership in a video rental club. Meanwhile, Christine’s entire 153-page POV section contains only 10 pages at the end that don’t overlap with Rayona’s; overwhelmingly, this middle chunk is spent rehashing things we already know or could infer from Rayona’s section. And Rayona’s section, too, spends a lot of time developing her relationships with minor characters and settings which then never appear again. I seriously considered quitting the novel in the middle.

But here’s an example so that you can judge for yourself. In this scene, Christine is finally alone with her former nemesis – her brother’s best friend – just after the brother’s funeral:

“The waitress arrived to take our order, and I paid her my full attention. She must have been sixty-five, but all the same she gave Dayton the once-over while she waited for us to decide. Dayton had a Montanaburger with fries, and I had the meatloaf plate with a tossed salad on the side.

“What kind of dressing you want with that, hon?” She peered at me from above her black and rhinestone glasses frames.

“Italian,” I said, like a city girl who knew her way around.

“I need a à la carte Italian,” she called across the serving counter into the kitchen, and tacked the page with our orders on a metal wheel, though we were the only ones eating. The cook spun it to see what to fix.

Red and green holiday tinsel still lined the doors and a string of colored lights framed the mirror behind the bar. The waitress moved from table to empty table, sashaying her hips as she straightened the ketchup bottles. She had a high bouffant the color of washed-out lace, exactly like the angel hair that swirled beneath the artificial tree with gold ornaments that was balanced on a table at the end of the room. She was decorated too. Over her beige turtleneck she wore a black felt bolero with MERRY and CHRISTMAS written in green glitter on either side, and around her neck hung a pendant made from a Bic lighter in a gold lamé case. It swung like a charm between her low breasts.”

Look, I don’t care about this diner or waitress that we’ll never see again. I’m here for the interaction between Christine and Dayton – which winds up getting less page time than the exhaustive description of the restaurant and its menu.

The third mistake is the ending, and there too, Dorris’s writing is tripped up by lack of proportion – by which I mean, a failure to allocate the most space, and the most important space, to the parts of the story that are important, while compressing the minor details into smaller and less prominent segments. There isn’t really an ending here. Rayona’s and Christine’s sections end at seemingly random points, and then Ida’s section turns out to be entirely backstory, ending when Christine was an adolescent, and neither giving Ida’s viewpoint on the subsequent bitter conflict between the two women, nor providing any resolution in the present.

But there’s one aspect of the ending that was particularly curious to me: both Rayona’s and Ida’s sections end on a discussion of Christine’s adolescent religious disenchantment, which doesn’t seem to be important to Christine herself at all. At most, this episode supplies a simplistic answer to the question “why is Christine a party girl?”, which isn’t a question I expect to be at the forefront of any reader’s mind.

The questions the novel does raise, and then never answers, in order of importance as I saw it: What does Rayona’s future hold? Where will she live, what sort of understanding will she reach with the other major characters, will she break gender barriers in rodeo, will she ever return those blasted videotapes? Why is Ida so bad at showing her love? Will Christine ever accept responsibility for what she did to Lee? Were Lee and Dayton a couple?

I wound up wondering if perhaps Dorris gave this episode such prominent billing because he intended the novel to be a critique of religion, or at least of Christian outsiders on reservations – but that doesn’t really fit the rest of the novel. The priests, while of questionable morality, are minor characters who act to facilitate decisions other people have already made, rather than driving the action themselves.

In the end, the frustration never paid off. There was potential in the characters and plot and settings, and that kept me reading. But ultimately, like the title itself, this book consists of too many words with too little meaning (the raft, while visited, is never particularly important). I wouldn’t recommend it.