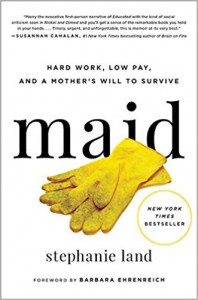 I had a mixed reaction to this book. On the one hand, the author tells a compelling story about life in poverty, and about its physical and emotional effects. I kind of want people to read the book for that reason, because it’s a life that the comfortably-off don’t see or understand. But on the other hand, there’s a long list of things that trouble me about this book, from the author’s avoidance of her own responsibility to its scattershot messaging about poverty.

This is a memoir of a very difficult time in the author’s life, when she became a destitute single mother, winding up in transitional housing with her baby, and had to scramble to survive, working a demanding, low-paid job cleaning other people’s homes, piecing together government benefits whose requirements often frustrate their purposes, trying to raise her child well while always stressed out, both of them constantly sick due to their living and working conditions, without being able to depend on anyone but herself. She does a great job of letting the reader in to the reality of this grind, and for that I could see it being a really eye-opening book for a lot of readers. And she’s a pretty good storyteller; the car accident episode in particular is harrowing.

But Land’s writing is defensive – I get the sense from it that she hasn’t really recovered from the constant teardowns from her unsupportive family and abusive ex, and still feels she can’t afford to admit fault, or perhaps that she shouldn’t have to. But memoirs are best when authors have achieved an understanding of their own past behavior and ability to admit their own mistakes, and Land doesn’t seem to be there. Now I’m not about to nitpick her spending choices, which is just mean, and lacks understanding of the importance of having some moments of happiness in a difficult life. But in the bigger picture, Land has a share in the fault for her situation. She becomes a poor single mother not at 18, not after a childhood of poverty and trauma, but at 28, after what she describes as a middle-class childhood. She never addresses what she did with the first decade of her adulthood, but here’s what she didn’t do: acquire higher education, develop job skills, build a stable relationship or strong support network, or save money. And when she accidentally gets pregnant by a guy she’s only known a few months, and who pushes hard for abortion, the only plan she develops is to live with that guy in his camper as a stay-at-home mom. To that end, she trashes her college applications, allegedly because “I knew I had to at least give him the opportunity to be a dad.” Of course this blows up in her face after several months, and this is how she winds up desperate and poor. And she becomes much more desperate when she gives up the housing subsidy she miraculously receives early in her journey – knowing that the wait lists are years long – to move in with another guy she’s only known for a few months, and with whom it turns out that she has nothing in common. That ends too, and then she’s lost her safe, affordable housing and has to wear herself out to make up for it.

And you know, we all make mistakes. I’m not arguing that people who screw up don’t deserve government assistance or our sympathy. But I think it’s important for a memoirist to acknowledge her mistakes and explore why she made them, and Land glosses over everything I just described. I think she clearly has some deep-seated issues with romantic relationships, given her decisions, but she never quite addresses that; instead she blames everything on the men themselves without considering why she chose them. Her ex is portrayed so negatively that I became uncomfortable with the thought of their now-12-year-old daughter reading this. The later boyfriend is presented as if he’s the villain for wanting to spend all his free time watching TV rather than discussing books or politics, but come on – Land should have discovered this basic incompatibility before moving in with him, especially when she had so much at stake. And overlooking her own bad decisions makes me more inclined to be critical.

Then too, I have some doubts about where this book fits into the larger cultural conversation about poverty. Somewhat awkwardly, it seems to have begun as a housemaid-tells-all exposé of her clients’ lives, and mostly but not entirely shed that skin; there was a little more in here about their homes than I felt I needed to know. Land comments sporadically on poverty-related policies, but not in an organized way. When raising these issues, she claims authority beyond her own experience, arguing that she can just see that the other people waiting at the social service offices are hardworking, without apparently having gotten to know them or done research.

In the end, I just wondered what purpose this narrative is intended to serve. The author is politically progressive, but her story seems to fit most neatly into a Republican narrative: she falls into poverty as an adult due to her own bad decisions, but gradually drags herself out of it through persistence and hard work. Admittedly, there are some aspects conservatives wouldn’t like so well: she only manages that feat due to numerous government benefits, and while she doesn’t examine her privilege as a white able-bodied woman, that clearly helps as well (a couple of times she talks her way into better housing situations where the landlord probably wouldn’t have taken on a ghetto-speaking black woman). It’s strange that she wants to rail against the injustice of poverty, and yet her ideas about why she succeeded better than others seem to boil down to her determination and not the ways in which she was dealt a better hand.

So I understand the mixed responses to this book. On the one hand, Land’s story shouldn’t be expected to fit all our preconceived ideas or to represent all impoverished Americans. And it’s the kind of story we ought to be hearing more often. On the other hand, there’s a lot of mess here, and I think it would have benefited from both more therapy and better editing. Interesting, but I was hoping for better.