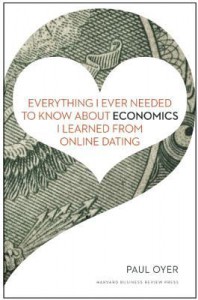 I shouldn’t have ignored the negative tilt to the reviews of this awkwardly-titled book, but the concept was interesting and so I read it anyway. It’s a quick read, with only 215 pages of text followed by endnotes and an index, and the writing is fairly engaging. But it is also shallow. It does explain some concepts from microeconomics, using examples from online dating as a starting point before seguing into other examples. But even without knowing much about economics, I didn’t feel like I learned very much from it, aside from becoming more familiar with some econ vocabulary. And there’s not a lot of substance on the online dating portion either.

Meanwhile, the author seems to have this relentless desire to put a positive spin on everything, as if he feels that economics sometimes leading to bad results would make the field of study somehow less worthwhile. For instance, he takes pains to insist that statistical discrimination isn’t based on animus, as if this somehow makes racial profiling or gender pay gaps more acceptable. It’s weirdest when he’s discussing the effect of physical attractiveness on wages: he blithely insists that being overweight doesn’t really have an impact once you “control for attractiveness,” as if weight somehow weren’t a factor in attractiveness. And then after noting that more attractive people get more promotions regardless of talent, he considers the argument that this is actually discrimination against unattractive people, only to dismiss it on the grounds that attractive people are in some unspecified way “worth more,” as if to say, “well, that’s all okay then.”

On the other hand, I did find the book quick and engaging reading, and many of its examples are relatively interesting. It’s probably not worth going out of your way to pick this up, but if you want some nonfiction beach reading, it could fit the bill.

nonfiction Economics 2 stars and a half