The Air You Breathe by Frances de Pontes Peebles 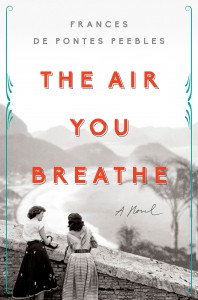 This is a generic work of historical fiction that has me questioning my past literary judgment – because I loved the author’s first novel, The Seamstress, to pieces, and thought it was a fantastic literary adventure, featuring two divergent but equally compelling storylines. That was nine years ago, though, and I did not find any of the wonder I remember seeing there in this eminently forgettable book.

Apparently inspired by the career of 1940’s Hollywood musical star Carmen Miranda, this book relates the story of two Brazilian girls who grow up on a sugar plantation, are enraptured by music, run away from home to make their way, and end up singing samba and finally making movies. It’s told from the first-person perspective of Dores, a hardscrabble orphan who befriends the privileged, self-absorbed Graça. Dores is the smart, practical one with a talent for songwriting, while Graça is the diva who captivates audiences.

The novel flows smoothly enough, with competent writing; it’s a quick read and long enough to live in for a little while. That said, it lacks rawness, vitality, momentum; we basically know what’s going to happen from the beginning, and then spend 450 pages following the course that’s been charted out from the start, without any real excitement or surprise, but with standard-issue philosophizing about life from a character supposed to be looking back on events from her 90s. Unfortunately, the first-person voice tends to obscure rather than reveal any personality Dores may have; it’s a generic voice for a generic character in a generic historical fiction story.

The other characters are pretty generic as well – Graça is the only one with much in the way of personality, while the supporting members of the band lack not only personalities but also lives and relationships of their own, to the point that how they feel about unexpectedly spending several years in a foreign country is never even mentioned. The two women’s antagonistic devotion to each other was never entirely convincing to me either; it largely felt like a result of the fact that the novel didn’t have room for distractions like developing their relationships with lovers or other friends, rather than anything organic.

So, unfortunately, the generic title and cover art turned out to be representative of the work as a whole – fine escapism if you want a nice long predictable novel, but nothing more than that. It isn’t terrible, but there’s nothing in the plot or characters or writing that stands out. Admittedly, I’m not the biggest music lover and don’t tend to love books about music; if you did love this, you’ll likely also enjoy The Gods of Tango, another Latin American LGBT music-focused novel (which also disappointed me). I am curious to listen to some samba, though.