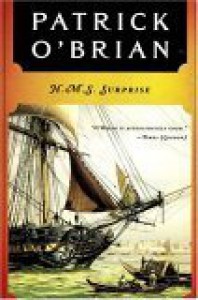 I reach a point in any series longer than a trilogy where reading about the same characters and the types of situations they get into no longer does much for me. It's lost the freshness and excitement of the beginning and fallen into a rut, even if specific events are happening that haven't occurred before. I was looking forward to this book after really enjoying the second book and seeing all the reviewers calling this one their favorite, but unfortunately this was the book where I realized the series has been played out for me.

Most of this book is a long sea voyage, aimed toward what seems to be Cambodia. Captain Aubrey is tasked with delivering a government envoy, and for some reason seems to make a leisurely sail of it: they even stop in Rio on the way to sailing around Africa (given the amount of research that has clearly gone into these, I presume that was common?) and seem to be taking a lot longer to make the trip than other available forms of transportation, given that they receive rather up-to-date letters from home all along the way. Toward the end, bafflingly,

the envoy dies en route and so they give up and turn around, with no attempt to deliver his message or even let the sultan at their destination know of the situation.

Was diplomacy really handled this way? It makes the entire plot feel like a giant McGuffin.

Plot quibbles aside though, I'm just not into that into these books anymore. They still haven't given any significant development to anyone else on the ship; the only people other than Aubrey and Maturin who receive much at all are their love interests, who play a small role in this book. The principals' relationship was very complex and still developing in the first two books, but here it doesn't feel like there's much more for the author to do but retread old ground. And, finding the plot and characters less exciting than in the past, I found myself with less patience for being unable to picture much of what's going on (not sharing the author's fascination with Napoleonic Wars era ships and guns), and for the writing style that sometimes requires re-reading a paragraph several times to understand what's happening (due to unstated assumptions and norms and the author's habit of omitting key facts).

It isn't necessarily a bad book: the protagonists still have their complexities, the author's extensive research is still clear and provides a certain degree of immersion, etc. Nevertheless, I've hit my limit with this series.