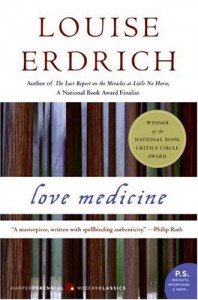 This isn’t a terrible book, but I can’t claim to have enjoyed it. Love Medicine is a somewhat awkward merger between novel and short story collection, made up of 17 pieces about two families living on the Ojibwe/Chippewa reservation over the span of about 50 years, from the 1930s to the 1980s. I call it an awkward merger because the stories all feature the same group of characters, but there’s neither the overarching plot you want from a novel nor the neatly encapsulated plots you expect from short stories. Life happens, but it isn’t organized by much plot structure at all.

Still, my dissatisfaction stemmed less from plotting issues and more from the fact that I simply never became invested in these characters. The first chapter was promising enough, but the older generation’s love triangle provided little interest, and something about the characters’ motivations and viewpoints felt off. It certainly doesn’t help that 13 of the 17 stories are told in first person, by 6 different narrators, of both genders, various ages, and from three different generations, and they all sound alike. Which tends to destroy the illusion that we’re hearing from different people, and for that matter, that these are characters at all rather than multiple figments of the same author’s imagination. It’s always baffled me that first-time authors – those least equipped to write multiple narrators successfully – are the most likely to attempt this feat, but I think I’ve hit on the explanation, which is that almost no one, no matter how experienced, can do this well and debut authors are also the least equipped to recognize their limitations.

That said, awhile back I tried to read Erdrich’s most recent novel, LaRose, and bounced off of it, finding the plot diffuse and the characters uninteresting. So it seems most likely that I simply don’t connect with this author’s writing. Fortunately for me, after finishing this I started Anything Is Possible, which provides everything I wanted here – a constellation of linked short stories about beauty and pain in everyday life, with characters and situations that caught and held my attention – albeit featuring white Midwesterners rather than Native Americans.

An endnote about the endnote: removing “The Tomahawk Factory” from the main text because “it interrupted the flow” and then tacking it on to the end just seems to muddle the book’s ending. I read it second-to-last, which happily turns out to be its chronological placement, once I realized it was meant to be part of this book and not a preview for another one.