The Land Without Shadows by Abdourahman Waberi 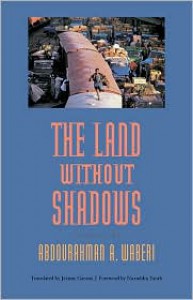 I read this short book (only 80 pages of text, plus a 20-page introduction) for my world books challenge, as a book set in Djibouti. I’m not sure I really “got” it, hence the lack of rating. Though billed as a collection of 17 short stories, most of these pieces are better described as a description, or an extended metaphor. Other reviewers have referred to them as essays, but as most of them seem to exist in fictional space (though often without plot and sometimes even without real characters), rather than advancing an organized argument, that description too seems not quite accurate.

Obviously I can only judge this work as a foreign reader and can’t predict the reactions of those who share the author’s cultural background. But I had to push myself through this one, and didn’t connect with it. The short pieces are highly stylized and often hard to understand, and only a couple, the ones with a recognizable plot, had me at all interested in the fates of the characters. However, the book did show me something of Djibouti. The pieces are set throughout the country’s history: dealing with legends, with the lives of nomads, with the colonial period, with modern war and disenchantment. Unfortunately for a reader unfamiliar with Djibouti, they are not organized chronologically. The introduction did help me understand these pieces and their context a bit better, and for other foreign readers I’d recommend reading that first; this isn’t the sort of book where spoilers are much of a concern. (Academics generally seem to assume that every single reader already knows how every single book ends and that no one gets any enjoyment from discovering the story as they go, so I typically read introductions last if I read them at all, to avoid massive spoilers. But here the introduction can serve as more of a readers’ guide.)