The Book of Phoenix by Nnedi Okorafor 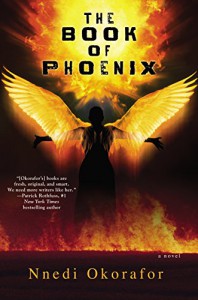 This short, futuristic novel is essentially a power/revenge fantasy focused on the exploitation of people of African descent, especially in medical research. (Calling it a power fantasy isn’t necessarily a criticism; much of sci-fi and fantasy consists of power fantasies for white male nerds, so it seems only fair for others to get a cut of the action.) Despite a compelling start and socially relevant themes, however, this one flopped for me.

Phoenix lives in a future America in which powerful corporations perform medical experimentation on people, mostly black, who live locked up in mysterious Towers. She knows nothing else and is content until something awful happens to her best friend and love interest, at which point she starts to rebel and discovers the powers with which she was endowed. This is a prequel to a post-apocalyptic fantasy tale and has a frame story, so it’s no secret that somewhere along the way the world as we know it is destroyed, and most readers will guess how; nevertheless, this is your warning that this review will contain SPOILERS.

Okorafor sets the stage well, with an oppressive dystopian setting and a young protagonist struggling to make sense of it and survive. The first third of the book makes for compelling reading, with a fast-paced story full of danger set in a believable world. But as in the companion book, Who Fears Death, the protagonist becomes too powerful, leaching the story of dramatic tension. Once Phoenix learns that she can fly for days on end, die and regenerate as many times as necessary, and move through time and space in an instant and apparently without limit, the story no longer presents obstacles that really challenge her. She attacks one of the Towers alone and without planning and succeeds, so the long stretch toward the end spent preparing to attack another with a group seems unnecessary and anticlimactic (though from a narrative perspective, it allows some down time and for Phoenix to bond more with other characters).

The end also proved unsatisfying. Phoenix suddenly decides the world is irredeemable and that the goddess Ani – who, mind you, does not appear in the book – wants her to destroy it. This decision made little sense to me: after all, her lover is alive and needs rescuing, and while she did just discover that several powerful and corrupt men have used the Towers’ research to extend their lives indefinitely, there’s nothing stopping her from hunting them down individually. The connection to the writing of the Great Book and the world of Who Fears Death also seems strained, though I enjoyed the chapters of the frame story as an independent short story.

Meanwhile, the characterization is fairly simplistic; reviewers who have interpreted this as intentional due to Phoenix’s chronological age may well be correct, but I have my doubts, as the book portrays Phoenix as an adult woman in her intellectual capacity and ability to form relationships. Likewise, the writing style is simple and sometimes staccato, which suits the dystopian setting fine. The world has texture and is a conceivable outgrowth of our world, an important but often-overlooked element of a good dystopia. On the other hand, some details seem under-researched: the bizarre chapter in which, despite the secrecy in which these projects are shrouded, the only records of ongoing medical experiments turn out to be catalogued and housed in hard copy in the Library of Congress (which apparently will switch to Dewey Decimal in the future?) available for browsing by anyone with ID, has been thoroughly dissected in other reviews.

Overall, while this book has some interesting ideas, their execution proved to be a letdown. Not having thought much of Who Fears Death either, I’m ready to conclude that Okorafor’s work is not for me.