The Cost of Sugar by Cynthia McLeod 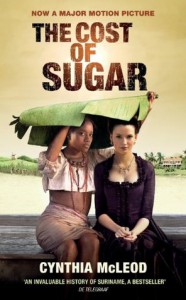 This is a lively, melodramatic work of historical fiction set in mid-18th century Suriname. At that time, the small nation on the northern coast of South America was a Dutch colony consisting of sugar and coffee plantations carved out of the jungle, many of them run by Jewish owners who arrived in Suriname via Portugal and Brazil, and all of them worked by slaves. Unlike in North America, however, proximity to the jungle meant that slaves often escaped to form their own communities, which were in constant conflict with the colonial government.

The story spans 14 years and has a large cast for under 300 pages, but its protagonists are stepsisters Elza and Sarith, both daughters of Jewish plantation owners. The two are best friends as girls, but soon find themselves opposed, primarily because Elza is a sweet young woman who treats the slaves well while Sarith is short-sighted and willing to ruin the lives of everyone around her in order to get her way. Yes, it’s that kind of book. The book focuses on Elza early on, then shifts its attention later in the story to Sarith, Sarith’s slave Mini-mini, and a young mercenary named Jan.

Which is to say that there’s no single plotline, and characters come and go rather oddly (I expected Alex to become more important than he did, and Amimba, as the first character we meet, to have something more than a walk-on role). But as a story about a place and a society, rather than any single protagonist, it flows well. The plot moves quickly and stays interesting, the translation is fluid, and the characters – if not particularly complex – are sympathetic, except when not intended to be. It presents a detailed picture of a historical era that doesn’t feel overly influenced by modern views, though it can be a little ham-fisted. The author has clearly done her share of research on Surinamese history and is able to bring her cultural knowledge to the pages.

Interestingly, most of the novel was originally written in Dutch, but slaves at the time were forbidden from learning Dutch, so conversed among themselves and with whites in Sranan, a creole language related to English as well as other European and African languages. The author originally wrote conversations involving slaves in Sranan, which is evidently still sufficiently widely-spoken in Suriname for the original audience to understand. In the English version, the Sranan dialogue is translated, but you can see the original in the footnotes. Helpful footnotes also explain those words or concepts that will be unfamiliar for the English-speaking reader (there’s a glossary at the end too, but I didn’t need it).

Overall, this is an entertaining work that will likely appeal to those who enjoy popular historical fiction. It’s not great literature but doesn’t try to be. And props to the author for writing a book for a country she was told “doesn’t have a reading tradition” – this book is now apparently beloved in Suriname after all.