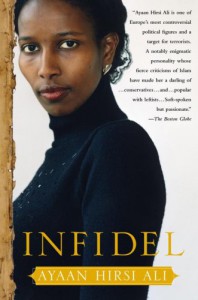 This is a fascinating memoir from an impressive author. Ayaan Hirsi Ali was born in Somalia; just a generation before, her family were nomadic herders. She spent her early years in Somalia before her father’s political involvement forced the family to flee; she and her siblings spent their teenage years in Kenya, where the author briefly joined the Muslim Brotherhood while her mother longed for the “pure” Islam of Saudi Arabia. Her family was troubled to say the least, though she doesn’t quite seem to blame either of her parents. As the region became even less stable in the early 90s, her father decided to save her by arranging her an unwanted marriage, at age 22, to a Somali man in Canada seeking a traditional Somali wife. But the author managed to escape and claim asylum in Holland, where she worked, educated herself and went to college for political science. Her intellectual awakening distanced her from Islam, and she eventually became a member of Parliament, promoting rights for Muslim women and a greater integration of immigrants into Dutch society. Proving her point, this outspokenness provoked a violent response.

As a piece of literature, this is quite good. The author writes well; it’s a compelling story and written with the sort of physical and emotional detail that promotes a high level of engagement from the reader. At times it’s downright dramatic. Although the author is political, it never reads like a public relations piece; she’s no angel here, and there are no clear villains. She does portray herself as a victim rather often, but this rarely seems related to any political agenda; her mother is sometimes abusive, but the council of elders convened to determine the legitimacy of her leaving her husband respects her decision. There are some tough scenes in this book – the author and her sister undergo female genital mutilation early on, for instance – but life goes on and people can’t simply suffer all the time; my concern that the book would read as a catalogue of atrocity turned out to be unfounded. The author has a strong viewpoint, yes, but people are complicated and this book shows that, rather than attempting to reduce all of life to a political agenda. You could read this as fiction and come away satisfied.

Nevertheless, the author is a political figure, accounting for much of the polarized reaction to this book; I think much of the negativity comes from information outside its pages, and a brief perusal of her Twitter feed explains why. At the time period covered in this book – when the author is a student and a young politician – she’s wrestling with big questions and fighting for reforms that could make life better for Muslim immigrants in Holland: for instance, by ending funding for religious schools, as Muslim schools tend to focus on memorization and obedience rather than real learning. And she’s frustrated by the way Dutch values of toleration can prevent a response to abuse among Muslim immigrants. She calls for reform in Islam, so that people can question its tenets without being subject to violence.

But the threats she receives (not to mention the brutal murder of a filmmaker with whom she makes a short piece questioning Islam’s demands for submission) and the reluctance of non-Muslims to believe how bad things can get seem to push her toward hatred of Islam as a whole. We see a little of that in the book: her efforts to convince the public of social problems among Muslim immigrants sometimes seem more geared toward proving that Islam is a problem than finding practical solutions. Her public statements now seem even more slanted in that direction (though she is working in the U.S. to increase penalties for FGM, for instance). I respect her strength and dedication, and generally agree with her critiques of the Muslim world. But promoting divisiveness is a terrible idea, and I’m concerned that may be the primary effect of her advocacy. This isn’t a criticism of the book, necessarily; if anything, it shows how honestly the author comes by her opinions.

In summary, then: this is an excellent story, well worth reading. It is not, for the most part, a political book, and I don’t judge it Islamophobic, defining Islamophobia as prejudice toward individual Muslims or a crusade against Islam while knowing little about it. It made me think, and that’s a strength in any book.