Two Dollars a Day by Kathryn Edin and Luke Shaefer 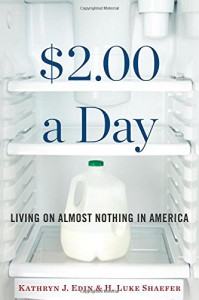 This is an excellent book about deep poverty in modern America. It covers a lot of big issues – employment, housing, public benefits – but also makes them personal, through the well-told stories of eight families struggling and often failing to make ends meet.

In the U.S., we tend to think that our version of poverty is cushy by global standards; respected news outlets mention people living on $2 a day or less in India and say, “We can’t imagine that here.” Unfortunately, all too many people don't have to; at any given time, 4% of Americans are living on a cash income of $2 a day per person or less. Many of these are actively looking for work, but with welfare (i.e. cash benefits to needy families) mostly eliminated, or reduced to the point that eligible recipients may be better off spending their time looking for work, those who can't find jobs quickly are usually out of luck. Most poor people can get food stamps, but there’s not enough housing assistance to go around. As for everything else – utilities, transportation, clothing, school supplies, etc. – you’re on your own.

At first I thought the title was a misnomer, that while some people have literally no cash income (i.e. nothing other than food stamps, which can only be used for food), nobody actually earns $2 a day. Turns out I was wrong. One family of four – a married couple and their two young children – live on the $60 a week the mother makes by donating plasma. A huge extended family, whose family business went bust during the recession, lives on the grandfather’s disability benefits and whatever they’re able to scrape together by selling scrap metal. A single mother with two daughters and a grandson makes do with $150 a month in child support and a bit of cash earned by selling homemade sweets to her neighbors; she’s too sick to work but not enough to get disability benefits, yet – due to a housing voucher – heads likely the most stable household in the book. It’s probably not a coincidence that it also seems to be the happiest, and with the best hope for the future (the older daughter is preparing to go to college).

Most of the families in the book are just scraping by, though, ricocheting from one crisis to the next. Work isn’t a magic wand: at the bottom of the market, it’s hard to find a job (especially without money for transportation or decent clothes), and the jobs that exist are poorly-paid, tend not to offer full-time hours (to stay off the hook for benefits), and yet have inconsistent schedules that demand their workers be available at all times. This isn’t to mention the health hazards that come with many of them: one single mom finds that her job, cleaning out foreclosed, and often unheated, homes in the dead of winter doesn’t just make her sick, she passes it on to her kids as well. And compared to professional jobs, low-wage work is often unforgiving: miss work because you don’t have transportation, and you can find yourself out of a job as well. Plenty of other people are available to take that spot.

Meanwhile, without a decent income, housing is a huge problem. There is actually no state in the country in which a single, full-time minimum-wage income is sufficient to afford a two-bedroom apartment at market rent responsibly (meaning 30% or less of household income goes to rent). So even when they’re working, many of these families can only dream of a place of their own, and when they’re not, well, homeless shelters are limited time only. Instead, they double up with family and friends. That can be a godsend, as it is for one young couple struggling to get on their feet, but oftentimes it causes more problems. One mother and her two kids bounce among bad situations: an aunt rents them a bedroom cheap, but the cousin and her boyfriend drink and fight all night, resulting in regular police calls; then the mom moves the family in with an uncle, only to catch him molesting her 9-year-old daughter. Another single mom, without family to rely on, lives in the dilapidated home (water has to be hauled up from the basement) of some dysfunctional friends – but at least it’s better than living with the abusive ex who fathered her child.

The authors do a great job with the individual stories, which are compelling, but also at weaving in the bigger picture through facts and statistics. For a short book – only 174 pages plus endnotes – it has surprising breadth. Unlike most similar books, set exclusively in one major city, the authors here follow families in four very different places: Chicago; Cleveland; Johnson City, TN; and the Mississippi Delta. This creates room for interesting contrasts, including the recognition that the level of services (homeless shelters, food banks, free medical clinics, etc.) provided in major cities is not available in most smaller places. There is also diversity in the families portrayed, the one similarity being that all have kids: because these are the people who would once have been eligible for welfare, but also because hopefully everyone can agree that no child should have to grow up in these circumstances. Especially in a country that has the money to do something about it.

The epilogue contains a number of policy proposals. Interestingly, the authors themselves don’t think the U.S. should bring back welfare as it once existed; getting paid for doing nothing goes against American values, to the point that many recipients hated it. (I might have wanted to disagree with this, but found my own reactions to these stories in line with the authors’ claims about American values. The ones I felt for most were the ones who, despite incredibly traumatic lives, found some measure of success: Tabitha, who is hopefully headed for college, and Rae, who doesn’t have that chance but is still named “cashier of the month” at Walmart.) The Earned Income Tax Credit has been far more successful – though it also costs more than welfare, and redirects that money to people who are already earning, albeit not much. The authors’ suggestion is a jobs program along the same line, that makes it possible for people to work and rewards earnings, coupled with emergency cash assistance for crises.

Sadly, I’m not sure if any solutions are realistic; deep poverty is not a problem politicians are much interested in talking about. But the book certainly raises awareness, and it is well-written, engaging, and persuasive. And short! I hope that more Americans will read this; perhaps that will get us a little bit closer to a solution.