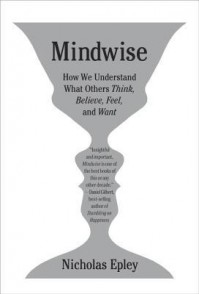 This is one of those psychology books for a general audience that does much more to inform readers about the failings of the human mind than to teach us how to be better. In other words, it’s more intellectual than practical. That said, it’s accessible and I think most readers would benefit from at least some of its information.

People are pretty good at reading each other’s minds, all things considered, but also overestimate our own abilities. For that matter, we don’t always know our own minds: one study had people giving their reasoning for choices they hadn’t actually made, apparently believing that they had.

Mindwise discusses three common mistakes people make in inferring others’ state of mind. First, there’s assuming other people think the same as we do, when they actually are working with different information, or simply see things differently. Realizing that self-centered thinking is a mistake when drawing inferences about others’ minds can be liberating – one study had participants wear embarrassing T-shirts, which went unnoticed by most others. Second, there’s using stereotypes. This isn’t necessarily a bad word – given that none of us can ask every person in the world what they think about every subject, we have to make some assumptions based on the firsthand experiences we do have and the information we’ve gathered secondhand – but stereotypes often lead us wrong.

Third, there’s assuming others’ actions reflect their minds. While we recognize the effects of circumstances, chance, and other people’s actions on our own, when it comes to other people we tend to assume their decisions are made freely and reflect their character. An interesting example given in the book is that of the Black Friday shoppers who failed to help while a man died of a heart attack in the store. People hearing the story afterwards assumed the other shoppers were greedy and callous. Actually, first, it’s surprisingly hard to notice something is awry while focusing on something else (think of the gorilla on the basketball court), and second, people in crowds do a bad job of recognizing emergencies – they look to see how others are responding, and if nobody else seems to think it’s an emergency, usually won’t intervene unless their own training or experience has taught them otherwise. Epley also gives the example of the people who didn’t evacuate New Orleans before Hurricane Katrina: many politicians talked as if they simply chose not to, while in actuality, many of those who didn’t evacuate lacked cars, money for hotel stays, or out-of-town connections who could have taken them in. Without the resources to do otherwise, you don’t really have a choice, and a publicity campaign about the importance of evacuating wouldn’t have done nearly as much good as, say, providing buses.

As far as how to understand one another better, Epley doesn’t offer many answers. Studying body language is of minimal use to people who already have reasonable social skills (though it can be helpful to, say, those with autism); we actually gather far more from people’s voices than their bodies. Attempting to envision another’s perspective can also be unhelpful, entrenching us in our own positions and increasing our overconfidence without improving our accuracy. Epley’s best advice is to practice humility when attempting to read other’s minds, and to listen to what they say. (Your loved ones will appreciate you more if you buy them gifts from a wish list or pay attention to their hints than if you come up with your own ideas – yes, studies confirm this.) Of course, this is of minimal help if you’re looking for advice for situations where people won’t just tell you what they think – for instance, you want to know what others really think of you, or learn to distinguish truth from lies. But my takeaway is that there’s no easy answer to any of that: you just have to pay attention, and work to create conditions where people feel comfortable telling the truth.

All that is pretty interesting, though not mindblowing, a helpful reminder even if much of it sounds obvious. And it’s a short book, under 200 pages if you don’t count the notes, though it could have been shorter. There’s an out-of-place chapter about anthropomorphism, which seems to be included as a mirror for the chapter about the ways we dehumanize other people. But the ways people attribute human characteristics to animals, machines, the weather, etc., has nothing to do with the subject of this book (how people understand each other, or fail to). And it showcases an apparent disdain for animals and pet owners on Epley’s part; he talks about people being “tricked” into having relationships with their pets.

At any rate, this is pleasant reading, with an accessible and engaging style, and with the possible exception of the anthropomorphism chapter, I enjoyed the author’s voice; he comes across as good-hearted and thoughtful. If you know much about psychology, you’re unlikely to encounter much new information here, but overall it was worth my time.

nonfiction Psychology 3 stars and a half