The Winged Histories by Sofia Samatar 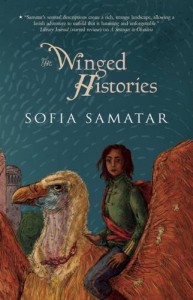 I didn’t always understand this book, but it is beautiful.

This is a fantasy novel set in an empire during a time of civil war. It isn’t a story of battles or magic, but of the lives of four women involved in events: Tav is a noblewoman who runs off at a young age to join the army, and later helps foment rebellion; Tialon is the daughter of an ascetic priest whose zealotry and influence over the king have made more enemies than friends; Seren is a singer from a marginalized group of nomads, who becomes romantically involved with Tav; and Siski, Tav’s sister, is a socialite who’s running away from love but will finally have to face her fears. I tend to avoid books with multiple narrators, as they often run together, but here each section has a distinct format and structure, and some are in third person while others are in first; so the technique works well.

The writing and imagery are particularly lovely, and the story comes together well. You do have to give it some time – the beginning can be confusing (perhaps less so if you’ve read A Stranger in Olondria), and I often found myself flipping back to re-read sections after learning new information. The book provides a wonderful mix of otherworldliness – it feels like only a small window on a strange and beautiful place – and real-world themes, concerning war, privilege, and the ways people use power over one another. I would have liked a bigger climax and more definite conclusion, but I enjoyed this book and would read another by this author.