Child of Flame by Kate Elliott 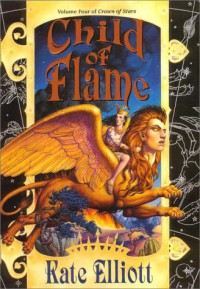 For the most part, I continue to enjoy these books. But every fantasy series longer than a trilogy seems to experience a slump by book four or five – the books grow longer, yet move more slowly – and Crown of Stars is not proving an exception to that rule.

There’s a lot going on here, and the plotlines dealing with the Quman invaders and King Henry’s foray into Aosta to claim the imperial crown are enjoyable. Elliott continues to resolve plotlines and take them in new directions, and the end of this book has me looking forward to the next one. This book’s weakness is that it removes both of its protagonists from the main action, spinning them off into tangential subplots. Liath spends the entire book on a spirit quest, which at least doesn’t take up many pages, but I’m not convinced its ramifications for her character are worth more or less removing her from the entire novel. Meanwhile, Alain spends this book thousands of years in the past, at the time the Aoi were exiled from the earth. This is a creative way to give the world’s backstory, and at first I was entertained by the depiction of a Stone Age society, which appears well-researched. But this subplot gets a lot of page time without Alain’s ever figuring out what’s going on, and it turns into a travelogue, that bane of fantasy literature. Then too, I never invested in the new cast, and Alain’s innocence works better when contrasted with the intrigues of his medieval society than in the simplicity of a prehistoric setting.

So, while our protagonists are off in other worlds, the actual plot rests on the shoulders of the secondary cast. Who are not up to the standard of the secondary POVs in Elliott’s later series. Sanglant is a good character, but many of his scenes are seen through the eyes of Zacharias and the returned Anna, neither of whom has much to add to this story. (Has Anna’s ethnicity been changed, or has she just spent a lot of time in the sun? People are constantly noting her “nut-brown” complexion, which I don’t recall ever being referenced in book two.) Most of the rest of the story is told through the POVs of Hanna and Rosvita. These two are always in the thick of things and, yes, they are strong women, but they just aren’t very interesting. I’ve criticized their selection as POVs before for their lack of personal stakes in the outcome of the plot, but it’s more than that: they don’t have significant personal struggles at all, or flaws or weaknesses. It feels to me like Elliott went too far in making Hanna and Rosvita foils for Liath, who has issues in abundance, to the point that it’s hard to relate to them.

All that said, while I stalled on some of the Alain chapters, I did mostly enjoy reading this book and do intend to continue the series; the tangential subplots wrap up at the end of this book and I’m hopeful that the next will be a return to form.