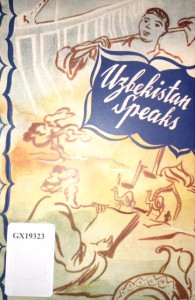 This book is basically what I expected from a collection of Soviet short stories that I found only by searching “Uzbekistan” in my university library’s catalogue, and had to request from overflow storage. Nevertheless, because I appear to be the only person on the Internet to have read it, and because six stories by six different authors invite wide variation in quality, I will provide details.

“Two Chapters from Navai” by Aibek – pgs 5-44
★
The collection begins with by far its worst piece. This “short story” consists of chapters 2 and 9 of a novel, which, judging from these two excerpts (selected, as far as I can tell, at random) is a plotless paean to a 15th-century Uzbek poet, who moved in court circles in Herat, located in what is now Afghanistan. Alisher Navai is promoted to various posts, and there is much rejoicing. And we care why?

“Sisters” by Askad Mukhtar – pgs 45-86
★★½
After “Navai” almost anything would be an improvement, and so this is – though this piece, too, consists of non-contiguous excerpts from a novel and contains far too many characters to be developed in such a brief piece, most of whose introductions we don’t see. Nevertheless, this rather propagandistic tale of Uzbek women finding freedom and purpose under Communism has a vitality to it which I enjoyed, and the novel is excerpted such that this piece has a clear story arc.

“The Healer of the Blind” by Abdullah Kahhar – pgs 87-116
★★★
Finally, an actual self-contained short story: a man captured by bandits and doomed to die takes a clever gamble. This story is predictable and never got me too invested, but it has a tension-filled slow build, the right number of characters and ends with a bang.

“Shirin Comes” by Aidyn – pgs 117-126
★★
This brief story – about an elderly couple who visit a communal work site and are impressed – barely registers, and nothing meaningful happens in it.

“New Year’s Party” by Rahmat Faizi – pgs 127-142
★★
A story of a social gathering that turns into a spat about whether the traditional practice of bringing hostess gifts is now offensive. This one is difficult to follow – I had to re-read much of it to figure out what was going on – and adds to the confusion by including far too many characters.

“The First Step” by Sa’ida Zunnonova – pgs 143-153
★★★
Probably my favorite story in the collection. A group of female students decide to include the wife of a male classmate in their circle, though he prefers to keep her isolated at home. This is the only story told in the first person, which is not my favorite storytelling device in fiction from my own culture (where I often find it a lazy attempt at a shortcut to emotional connection), but which in foreign fiction can help bridge the cultural gap. This turned out to be an interesting tale, though the last sentence is too heavy-handed.

The book does not contain any introduction or critical material, and ends with very brief bios of the six contributors. Oddly, I learned from the bios that the bookjacket mistakes the gender of Rahmat Faizi, who was actually a man (Aidyn and Zunnonova, the authors of the two shortest stories, are the only women included).

So, then. This collection was an interesting cultural experience – having never read any Soviet fiction before, I enjoyed being exposed to the different perspectives, and am glad I read this rather than the one translated Uzbek novel of which I am aware, which I knew would have driven me crazy. That said, I would hardly recommend seeking it out unless you also need it for a challenge.