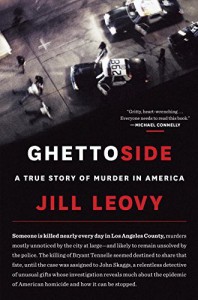 This is an interesting and informative book about a serious problem that goes ignored by most of American society: the extraordinary number of young black men who are murdered every year, most often by other young black men. (Despite the title – the book is set in Los Angeles – this isn’t just a big-city or inner-city problem; the same thing happens even in rural areas.) The author embedded in a “ghettoside” investigative division for several years, and the book focuses primarily on the murder of one 18-year-old boy and the subsequent investigation and trial.

Describing this book requires a discussion of the strange disconnect between its thesis and its focus. Leovy’s main argument is that high rates of violence are caused by the state’s failure to respond to violence: most black-on-black murders, let alone assaults and other violent crimes, in the poor neighborhoods of L.A. aren’t solved, creating impunity (which enables violent people) and leading to a situation in which people police themselves (through gangs and revenge murders). Violent crime against African-Americans has historically not been taken very seriously, and the more crimes are left unsolved, the more similar crimes will be committed.

But this book is told from the point-of-view of homicide detectives, all 6-8 of whom are featured in this book are hardworking, passionate about their jobs, and extremely capable. And the murder that forms the backbone of the book is at no risk of being swept under the rug, because not only is the victim a good kid, he’s the son of another LAPD detective. Apathy, victim-blaming, and incompetence never enter the picture, in this case or any others depicted; strained resources and lack of departmental support do (an eye-opener for me – I’d have expected murders to be the top priority for any police department), but rarely to the extent of jeopardizing an investigation. The investigation stories, the difficulty of finding witnesses and getting them to talk when faced with the threat of retribution, the evidence-gathering and interrogation techniques used in the real world – all of this is fascinating, certainly. And it shows that drive-by murders can be solved, with skill, persistence, and an understanding of the place involved. But it doesn’t show much about the causes of violence, or how a “typical” detective might mismanage a ghettoside case, or how much solving cases affects the murder rate.

But while the arguments don’t quite connect to the narrative, both individually are good. Leovy provides historical and sociological support for her arguments, and lots of human interest in the narrative. She has an engaging, very readable journalistic style, and brings to life all of the people involved in the cases without losing sight of the larger picture (the enormous number of black men and boys who are killed in L.A.). This is definitely worth a read.

nonfiction United States Sociology 3 stars and a half