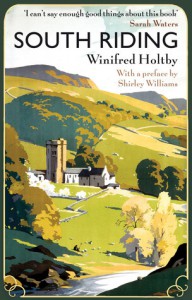 I’m going to go out on a limb and say this is the best classic novel you’ve never heard of. Correct me if I’m wrong.

This book is set in the early 1930s in the fictional South Riding of Yorkshire. It’s an ensemble piece, structured around the activities of local government and the ways they intersect with the characters’ lives. Most versions of the cover feature Sarah Burton, the fiery, progressive new headmistress at the local girls’ school, and she’s one of the most important characters, but there are others: the elderly alderwoman, Mrs. Beddows; the gentleman farmer, Robert Carne, and his troubled daughter, Midge; the bright but impoverished teenager, Lydia Holly; the hedonistic but devout preacher, Councillor Huggins. South Riding follows these characters (and more*--it’s a story about an entire community) over two years, with chapters alternating among various characters.

There’s a lot going on in this book, and Holtby has a clean style that keeps the story moving and focused on the most interesting moments in the characters’ lives. I’ve seen this book criticized for the space devoted to mundane aspects of adult life--the book focuses as much on the characters’ working lives as their personal ones--but that’s one of the reasons I loved it. It avoids well-trodden novelistic paths: most of the characters are middle-aged or older, and first love doesn’t appear even as a subplot. In large part it’s a novel about work and why it matters; anyone who hopes to make a difference with their career will empathize with Sarah Burton’s struggle to make a difference in her school and her occasional doubts about whether her work is important enough in the scheme of things.

But there are many poignant and relatable stories that come out of the characters’ relationships with their work, from the sad case of Agnes Sigglesthwaite, who meant to be a researcher but wound up a miserable science teacher, to the fervent socialist Joe Astell, who takes a cushy job on the county council due to illness and sometimes has trouble relating to the very people he’s trying to help. On the whole it’s a positive and hopeful book, but there is a lot of illness and dying here; the author was terminally ill when she wrote it, and it’s hard not to imagine something of Holtby in Astell, who is desperate to accomplish his work before illness keeps him from it. On the other hand, one of the saddest subplots deals with Lily Sawdon: she is one of the few characters with no real occupation, and perhaps as a consequence, decides her duty as a wife is to hide her sickness from her husband, even at the expense of getting treatment.

South Riding is a character-driven book, and works brilliantly, because the characterization is brilliant. Holtby has the gift of creating fully-formed, memorable characters within just a few pages, characters with all the complexities and foibles of real human beings, and at the same time, people who are easy to sympathize with and like. Sarah Burton is especially memorable: she’s a spinster in her late 30s, but she’s not a damaged or pitiable figure; she’s energetic and optimistic, sociable and engaged with other people. Also a standout is Mrs. Beddows: as the South Riding’s first female alderman, she’s expected to be colorful and allows people to believe outlandish stories about her, but in reality she’s more conventional than that, a worldly-wise grandmother who finds happiness through community involvement--and through the attention of Robert Carne, whom she views as a combination of attractive male friend and spiritual son-in-law. I could go on to describe most of the cast, because they are all excellently-realized characters drawn with exceptional psychological insight, but nothing I say will do Holtby’s writing justice.

Another amazing thing about this book is just how modern it feels, despite being published in 1936. By virtue of its focus on interesting, varied female characters--as well as interactions among them--it’s one of the most feminist novels I’ve read, and indeed Sarah’s feminism would need little updating for the 21st century. An author writing this story today would no doubt be condemned as anachronistic, but since it really is an old book, I’m happy to praise it for being just as relevant now as when it was written. The same goes for the politics. This isn’t a book about politicking, but it is a story involving local government during a time of economic depression, and Holtby’s progressive beliefs do shine through in the way the characters think about their world and the effects of their decisions. For me that’s a plus; literature should deal with big ideas, and the structure of society and purpose of government are certainly that. The fact that these topics are controversial means authors should engage with them, not ignore them.

I do have one issue with the book that bears mentioning. The plot doesn’t fit together quite as well as most ensemble pieces; Holtby perhaps got a little carried away with her ability to write great characters, and spent disproportionate time on some secondary players. Alfred Huggins is the chief offender here (I’ve called him a protagonist above, because of the number of chapters starring him, but he has little interaction with or impact on any of the others), followed by the Sawdons. Also, I doubt many people will read South Riding for its language alone: Holtby has the good journalist’s ability to get to the heart of the matter without excess verbiage, but her use of words is rarely memorable.

In sum, an excellent book, and one that spoke to me much more than classics usually do. I’ll be keeping a copy on my shelf, and I hope some of you will give it a try too!


*Please don’t be intimidated by the character list at the beginning of the BBC edition. It includes everybody who’s ever mentioned in the book, but you won’t have to remember all of them.
Tweet