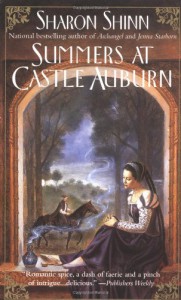 I am not the biggest fan of young adult books, but had hoped this one would appeal to adult fantasy readers as well. After plodding through the first 80 or so pages, I did find it entertaining, but with a variety of problems and inconsistencies that make it hard to recommend.

Summers at Castle Auburn is the first-person narrative of Corie, the illegitimate daughter of a nobleman. She spends her summers at court with her older half-sister, and the rest of the year with her grandmother, a village herbalist. At the beginning Corie is 14, and her biggest problem is reconciling her crush on the crown prince with her adoration of her sister, who’s betrothed to him. By Parts 2 and 3 she’s a few years older, and finally noticing the problems in her world: the prince’s erratic and dangerous behavior, and the kidnapping and enslavement of the aliora (elves or fairies of some sort).

It’s a predictable plot, but I enjoyed predicting it. And the aliora subplot is handled well; Corie begins the book accepting what she’s been taught, and with a vested interest in the system, because she loves having aliora servants. But once she sees the suffering this situation causes, she begins to rethink her assumptions.

The romance doesn’t work so well: both Corie’s and her sister Elisandra’s romances are treated as mysteries, with all four players either hiding their feelings or not realizing them until near the end. To the extent we can predict the eventual pairings, it’s through knowledge of fictional conventions and the process of elimination rather than actual chemistry; the relationships are left undeveloped.

And the end is unconvincing: while I applauded Corie’s actions in freeing the aliora, it’s hard to envision the nobility accepting her as queen after that. They’d paid a fortune for their aliora servants, and not only that, they’d paid most of it to Corie’s uncle, whose estate Corie and her sister had since inherited. Both the practical and the moral implications of this situation are ignored.

As for the characters, Corie is a typical YA female protagonist: headstrong, rebellious, naïve, and trained in herblore. (More than one problem is solved with herbs so convenient it’s as if they were invented for this plot. Oh right, they were!) Shinn does a good job with Corie’s voice, however, and the writing flows smoothly. Elisandra and Uncle Jaxon are interesting characters, but most of the supporting cast is flat. I was especially put off by the treatment of Angela, Corie’s best friend after her sister. Angela is one of those stock female characters whose only personality trait is a love of gossip. Because Corie wants to know what’s going on, she cultivates a friendship with Angela despite thinking of her as “the shallowest woman I’d ever met.” Which speaks poorly of Corie as a friend, but is also hypocritical, as the two girls’ desire to keep up with goings-on at court is essentially the same.

As for the worldbuilding, this is one of the cushiest, most egalitarian quasi-medieval settings I’ve encountered: everyone bathes regularly; the village wise woman is not only literate but has bookshelves full of novels; the nobility are on friendly terms with their guards and servants, who can all be seen sitting around a campfire together having a chat; Corie takes a gap year to do some waitressing and save money. To lovers of YA fairytale fantasy, I imagine this is a feature rather than a bug, but the setting isn’t charming or dreamy enough for me to cheerfully overlook anachronism. And the naming conventions are all over the place: the only rhyme or reason I see is that the characters Shinn likes get fancy invented names (Elisandra, Coriel), while the ones she doesn’t have commonplace and undistinguished ones (Bryan, Megan). It’s hard to imagine “Bryan” as a crown prince, while Corie gets a princess’s name despite her low birth.

In the end, if you want to turn off your brain for awhile, this isn’t the worst book you could pick, but you could do better. The writing seems intended to appeal to adults as well as teens, but it's not a book I’d recommend to adult readers.
Tweet