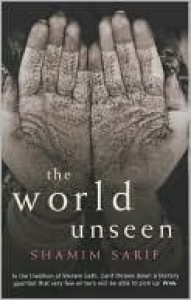 This is a disappointing little melodrama that fails to live up to its premise, as a story about two Indian women falling in love in apartheid South Africa. Instead it suffers from black-and-white characterization, over-the-top scenarios and a failure to address the most interesting questions raised by the plot.

Miriam is a traditional young wife and mother who immigrated to South Africa to join her husband, and now has two small children. Then she meets Amina, a fiery young woman who runs her own café and taxi business and is the book’s most interesting character; sadly, while the two appear to get equal billing initially, Miriam turns out to be the protagonist and Amina the love interest.

This book’s strength is that it does have an engaging plot; the story is entertaining enough, and it’s easy to get pulled in and quick to read. The characters, however, are flat. Our heroines have virtually no character flaws, while the antagonists are villainy incarnate. For instance, Miriam’s sister-in-law is vicious, lazy, oh, and a cheater and homewrecker just to make sure we get the picture, and also reports relatives she barely knows to the police out of “pure spite,” because apparently giving her an actual motivation would be too much. (Miriam, in contrast, is of course saintly and put-upon, doing all the housework herself without complaint, and she and Amina both risk themselves for people they barely know.) Then there’s the villainous police officer who never appears in a scene without assaulting someone, destroying property, or randomly shooting off guns, always unprovoked. Everyone in this book is all one thing, shorn of any interesting complexity.

Such characters are bound to generate ridiculous melodrama, and so they do. Most egregious is the sequence in which two police officers abandon their beat to go tearing about the country terrorizing people as if they were investigating a capital crime, all because of a tip from the evil sister-in-law that their other sister-in-law is (gasp!) married to a white man. Many readers will let this slide because, hey, apartheid, but even according to the law actually cited in the book, interracial marriage was not a crime. The government wouldn’t recognize such marriages, and anybody performing one could be fined £50, but arrest? Especially of people who married in another country long before that law went into effect, and were just passing through and not even staying together while in the country? Nope. Hint to authors: when even apartheid provides insufficient opportunity to make your characters as unjustly and tragically victimized as you envision, and so you feel the need to add to it, that’s a strong indication you should tone down the melodrama.

Through all this, I kept reading mostly because the central questions raised by the plot are interesting: will Miriam, a traditional Indian wife, choose to leave her husband for a chance at love with a woman? Can such a relationship ever succeed in 1950’s South Africa? But the book never goes there. So little is done with the budding relationship that the story would change little if it were a platonic friendship. In the end, Miriam decides she wants to continue seeing Amina, and that’s it. To make matters worse, Miriam’s husband has gone from simply cold to physically abusive, and the end of the book just leaves her there, as if her starting to stand up to him is sufficient resolution. The husband is a controlling man who turns violent when Miriam shows initiative or independence, so her standing up for herself only puts her in more danger as long as she remains with him. I’m not a reader who wants every thread tied off in a neat bow, but this book simply ends on a crisis point, with the primary plotline still in flux. It’s as if the author decided she couldn’t provide a realistic happy ending in this setting and just ended the book before she had to admit it.

Reviewers often attribute problems in debut novels to inexperience, and I do think Sarif shows the potential to do better. There are awkward and ungrammatical sentences here, but also plenty of passages that are fine. There’s goofy melodrama, but also some more effective, understated scenes. With a great editor and more work put into character development, I suspect she could write a good book; the storytelling foundation is there. But I won’t be the one rushing off to read her other works and find out.
Tweet