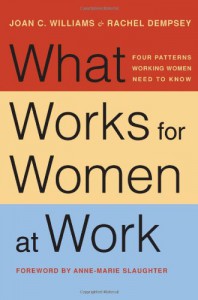 If you work in a male-dominated environment and find that you aren’t advancing as quickly as your work should merit, or that there’s gender-related tension, this may be the right book for you. I picked it up simply thinking that the occasional career advice book couldn’t hurt, but didn’t find any takeaways to apply to my own work in the near future.

Despite the title, What Works for Women is long on problems women can face in the workplace, and short on solutions. There are four major problems discussed. First, women’s accomplishments tend to be discredited or forgotten more easily than men’s, and men tend to be viewed as more competent and having better leadership qualities. Second, women are disliked if they’re too aggressive, but not respected if they’re too passive or girly. Third, mothers often aren’t seen as serious employees, or are judged as bad mothers if they are. Fourth, all this pressure can cause women to feel they must compete with each other for a limited number of “female” seats, or to resent or feel the need to dissociate themselves from other women, particularly those who have made different choices.

As far as the discussion of problems, the book is thorough and backs up anecdotes with research. The tone is non-judgmental and the authors take a big-picture view – noting, for instance, that women don’t just make less money because they’re too timid to negotiate; women who do negotiate their salaries are seen as less likeable to work with. So success isn’t simply a matter of overcoming your own ingrained expectations, when those around you have them as well.

How to succeed, then? The book has less to say about that, and much of what it does say is fairly general or obvious. For instance: keep track of your accomplishments so you’ll have them on hand when you need them; if you’re seen as too aggressive, add a feminine touch to your appearance or presentation; make clear your commitment to your job when you take maternity leave. The book doesn’t get into specific examples of problem-solving and its suggestions don’t seem particularly new or insightful. Here, the authors’ commitment to not insisting on one “right way” to be a woman can make the book seem wishy-washy; readers will only follow the advice they deem helpful anyway, so might as well give some even if it doesn't apply to every woman. If you’re looking for concrete tips, better go for something like Nice Girls Don’t Get the Corner Office instead.

As far as representation goes, this book gets points for addressing the concerns of diverse women; however, it does so in a fairly shallow way. More than half of the authors’ interviewees were women of color, but the 38-page chapter set aside for discussing racial dimensions of sexism focuses entirely on describing specific stereotypes and problems faced by women of color, without addressing any proven strategies for dealing with this. Instead, like much of this book, it mostly seems there to depress readers (“This has been a very lonely life,” one black professional is quoted as saying). Other chapters briefly address lesbians – along with black women, you may be able to get away with more aggression than straight white women can – and acknowledge that not all women want children – if not, you’ll make more money than mothers, though you may also have to fight expectations that you will be available 24/7 because you have “no life.” As far as the intended audience goes, like every other business book I am aware of this one focuses on the professional class; most of its examples come from corporate law or consulting, as well as some from academia.

Finally, the book is a mother-daughter collaboration, in an attempt to bridge the generational divide. But to me as a younger woman, this was minimally successful – Rachel Dempsey, the daughter, is the only 20-something whose input seems to have gone into the book (the 127 women interviewed were all at the top of their fields, and while the authors state that their ages ranged from 30s to 60s, it seems weighted toward the older end of the spectrum). And per the introduction, Dempsey’s role was apparently the writing itself, while Williams was responsible for the content. To me as a 20-something, it felt a bit dated. For instance, by referring to pants as “masculine” attire – I suppose the reminder that people in their 50s and 60s may think so could be helpful, but to me they’re gender-neutral, and a woman in well-fitting pants hardly looks masculine.

At any rate, I think this book is a good contribution to the literature on the effects of sexism in the workplace, but it is definitely not a how-to manual for women simply looking to learn more about how to succeed. If you have dealt with the four problems discussed, it could be a worthwhile read for you. As for me, I was disappointed and should probably have taken the time instead to read Lean In, or re-read Nice Girls Don’t Get the Corner Office.

nonfiction Business 2 stars and a half