The Witches by Stacy Schiff 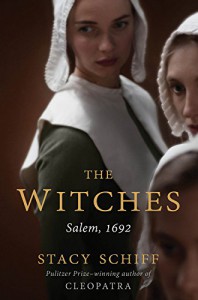 This book, a historical account of the Salem witch trials by an author whose prior work has been highly acclaimed, turned out to be a long-winded and tedious disappointment. I regret the many hours I spent slogging through it.

Schiff takes a textbook-like approach to the writing, throwing facts and assertions at the reader without connecting them through any meaningful narrative. We learn little about the accusers and victims; those curious about the lives, personalities, and motivations of the people most directly involved will be disappointed. There is more information about the witchcraft judges and the local ministers – in fact, perhaps the two most-discussed figures are Increase and Cotton Mather, prominent ministers who were not present for any of the events in Salem. Lengthy accounts of accusations and confessions are included, relating fanciful stories as if they were true: “Skimming groves of oak, mossy bogs, and a tangle of streams, Anne Foster sailed above the treetops, over fields and fences, on a pole. . . . Before Foster on the pole sat Martha Carrier, half Foster’s age and the dauntless mother of four. Carrier had arranged the flight. She had persuaded Foster to accompany her; she knew the way.”

Many pages are spent paraphrasing such accusations, but very few on analysis. The book has no organizing principle or thesis, focuses on no key figures, and has almost nothing to say about why the events in Salem might have occurred. And the writing style makes for laborious reading; it alternates between drowning the reader in details whose import to the larger picture is unclear, and wallowing in wordy abstractions that utterly fail to enlighten. It is often repetitive, and sometimes jumps between ideas that have no apparent connection.

I give a second star because the book appears to be well-researched, and I did learn some information about colonial New England. It sheds light on the strains placed on the community, such as deadly Indian attacks nearby; many of the young accusers were refugees or orphans. We also learn a bit about life at the time.

But despite the lengthy bibliography, the author makes sweeping generalizations that hurt her credibility; for instance, she claims the Salem witch trials were one of few occasions that women played a key role in American history and that after Salem, women “went back to being invisible, where they remained, historically speaking, until a different scourge encouraged them to raise their voices, with suffrage and Prohibition.” Women were invisible and had no effect on history in all of the 18th and 19th centuries? Harriet Beecher Stowe, Susan B. Anthony, Elizabeth Cady Stanton, Harriet Tubman, Louisa May Alcott, Sojourner Truth, Clara Barton, Belle Boyd, Dorothea Dix, Charlotte Perkins Gilman, Lucretia Mott, Elizabeth Van Lew, Sacagawea, and many more would beg to differ.

For that matter, the Salem witch trials themselves were a local event occurring in a few small towns; it would be hard to argue that any of the women or men involved had much impact on American history, especially compared with those listed above. Salem represents neither the first nor the last time people were executed for witchcraft in America, and while with its 20 executions, Salem claimed the greatest number of victims at once, it pales beside many European witch hunts. Perhaps my frustration with this book has soured me on this piece of history, but having read The Witches, it is even less clear to me why Salem has gained such a foothold in the national imagination.

Ultimately, Schiff can’t explain Salem, nor can she make it interesting. Instead, she gives us a 400+ page summary of her research, then explains that we have too little information to know why anything happened as it did. In other words, as far as I'm concerned, it's a whole lot of nothing. Those with a keen interest in the witch trials may find it worthwhile, but for the general reader looking to be informed and entertained by well-written, engaging historical accounts, this is one to avoid.