To the End of June by Cris Beam 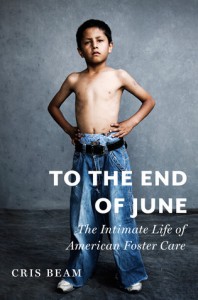 This is a compelling, though sobering, look at foster care and how it affects kids and families. This book is best read to get a sense of the major issues in foster care, and for the personal stories of the people the author follows, and less so for specific information about how the system works.

Foster care, as it turns out, is a big topic, so this book doesn’t cover everything (for instance, it focuses almost exclusively on New York). It starts with the reasons kids are removed from their homes – much more often for neglect than abuse, and “neglect” can mean anything from the parents being on drugs to a baby’s mother being an impoverished teen who doesn’t know how to care for a child. Babies and very young children are the most likely to be adopted, and so are often placed in pre-adoptive homes – but that can lead to heartrending situations for all concerned, when a biological parent wants the child back but the foster parents don’t want to give them up.

Meanwhile, kids who aren’t adopted – either because their biological parents try just hard enough to prevent their rights from being terminated, or because the kids are older and no one steps up – can be shuffled among different homes for years. In New York, apparently, nobody keeps track of past placements that worked out – so a kid can be fostered for years by a loving family, go home for a few months, and then when things go downhill again, be placed in a random new home, rather than with the original foster parents. (I believe this is handled better where I live – and certainly hope so, because that is a disaster.) The book also looks at group homes and institutions – the end of the line for foster kids, and a situation that usually only adds to a kid’s feeling of alienation.

Not surprisingly, this whole system leaves children more traumatized than it finds them, and much of the book focuses on teenagers and young adults aging out of the system. The author follows families who are committed to the kids and willing to adopt, and a few work out, but many flounder despite good intentions. And in the end, kids are on their own without any foundation – often having changed schools too much to earn a diploma, without the skills or maturity to keep a job, and most importantly, without the emotional and financial support system that almost everyone (rich, poor or middle class) relies on when transitioning to adulthood.

So, this is not a happy book, but it does illustrate all of these experiences in a compelling way, through the stories of kids and adults who have lived through them. Beam writes without judgment about the kids and parents, allowing readers to see what these folks are going through and draw their own conclusions.

A couple of Beam’s opinions come across a little too strongly, though. She opposes removing children from their parents in general – and while, by the end of the book, we can see why, she still takes it rather far, seeming to lament the deaths of children at the hands of their parents only because it is bad PR for marginal families and results in more removals. Clearly, some kids need to be removed. And in the conflict between biological and prospective adoptive parents, she’s on the side of the biological families, no matter how little they may have to offer. Beam describes her position as “liberal,” apparently because she is otherwise liberal – she acknowledges that opinions about foster care don’t fall along partisan lines, and I can see liberal and conservative arguments on both sides. At any rate, these opinions are most prominent early in the book, in the section dealing with babies; the chapters about teenagers and adults leave much less room for ideological differences.

My other criticism is that while the individual stories are intriguing and enlightening, discussions of law and policy are less so. Of course, laws change from decade to decade, and vary from state to state, while policy differs from county to county, and so this isn’t the focus of the book. But I was sometimes left unclear on how laws or policies discussed affect kids, or to what extent they are even implemented.

Despite those criticisms, I found this to be a very worthwhile read, one that engaged my attention and added to my understanding of a slice of society I knew little about. I would recommend this to those interested in foster care or sociology.

nonfiction United States Sociology 3 stars and a half