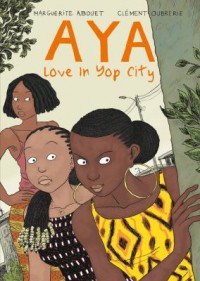 This book contains the final three graphic novels in the Aya series, which have apparently only appeared in English in omnibus form. This makes good sense, since each volume is short and incomplete in itself. This series is very consistent, with enjoyable characters and excellent, colorful illustrations. I’ve never agreed with the folks who see it as simply a lighthearted romp that shows a positive side of Africa – the storylines here include Aya and her classmates being sexually assaulted by a violent biology professor; Innocent living on the edge as an immigrant in Paris; and Felicite being kidnapped by her greedy father when news of her success as a model reaches her village – but it has a positive tone and shows characters emerging victorious from the problems life throws at them. I was initially skeptical about graphic novels for adults, but enjoyed this series and would be happy to read more books like this.