The Rebellion of Miss Lucy Ann Lobdell by William Klaber 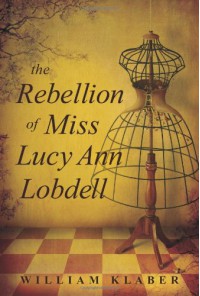 The opening of this book pulled me in with the promise of a fun adventure story, featuring a woman disguised as a man in 19th century America. But this novel is based on the life of a real woman, and by the last third it turns into a tragedy.

In 1855, after a failed marriage and leaving her young daughter to be raised by her family, Lucy Ann Lobdell set out in disguise to earn her living. As Joseph, a teacher of music and dance, she won the heart of a young woman; later, she became a frontier guard in Minnesota and even purchased her own claim. But her attempts to live life in her own way were foiled by a society that viewed her choices as criminal, or as a sign of mental illness.

This is an engaging story, with a well-paced narrative that captures Lucy/Joseph’s adventures in a first-person voice that feels fitting to the period, while including plenty of dialogue for quick reading. The writing style is clean and precise, without excess verbiage, and the tale holds the reader’s attention throughout. It is one of those stories that would seem too wild to believe if it weren't true, and I am glad this author brought it to light. Although a man (married to a woman, with kids), the author succeeds at writing about a woman whose sexuality and gender identity are fluid; there’s none of that obsessed-with-her-own-boobs, only-has-important-relationships-with-men garbage that often gives away a man’s attempt to write from a female point-of-view. And the author has done his research into the time period, creating a setting that feels authentic and is interesting to read about.

That said, I didn’t love this book. The jaunty tone with which it begins jars with the tragedy it becomes; I was prepared for hijinks and thus disappointed when it turned serious. And I never quite connected with the protagonist, whether because the book moves rather quickly through many situations with barely a pause for breath, or because the character isn’t fully-developed, or because the use of the first person to create intimacy with the reader almost always backfires for me (do you have any idea how many books I’ve read about “I”?).

All that said, this is a good book and worth reading. Read shortly after The Gods of Tango, which has a very similar premise; that book is more romantic and has a more luxurious writing style and happier ending, but this one is more immediate and engaging. If you’re going to read one historical novel about a woman dressing as a man, playing the violin and getting involved with women, this is your book.

Historical fiction United States historical women 3 stars and a half