In Dependence by Sarah Ladipo Manyika 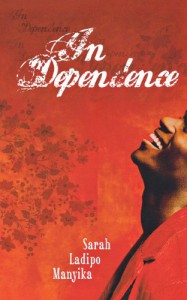 I had to get this book through Interlibrary Loan, because none of the excellent libraries to which I have access had a copy. Now I know why.

In Dependence is the rather diffuse tale of Tayo, a Nigerian who studies in England as a young man, and Vanessa, a woman with whom he becomes involved. The author has a lot of ideas, a lot she wants to say about being a student in the ‘60s, about the relationship between Europe and Africa, about writing about Africa and about intercultural romance (I wrote “interracial” first but the cultural aspect is most prominent in this book). But the plot clunks along, the first half focusing on a mundane romance and the second half trying to cover everything that happens to the characters forever after. Meanwhile, neither the characters nor the settings are fully developed; the book never quite brings to life the dynamism of student life in the 60s, and even the main characters have to do with one or two traits apiece.

Meanwhile, the presentation doesn’t help. There’s a general lack of commas, resulting in run-on sentences; there are continuity errors (Suleiman was a baby in 1970 but 18 in the mid-90s?); there’s word misuse, as in, “a ladder of taught muscles” and a “clothes shop come tailoring business, come secretarial services” (sic). The decision to italicize whenever characters are speaking Nigerian English is weird and distracting. Overall, this reads like an amateur effort by someone with a lot of ideas but who hasn’t quite mastered the nuts and bolts of fiction.

Interestingly, there are more reviews of this book on Amazon than Goodreads (which is almost never the case) and those Amazon reviews are overwhelmingly positive, in sharp contrast to the Goodreads average rating. A couple of the Amazon reviewers mention some relationship with the author, and I can't help suspecting that several more neglected to mention it.