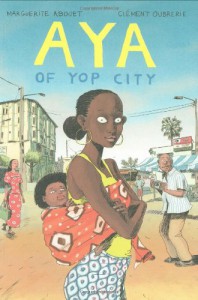 I enjoyed this second volume in the series: the story is engaging, the artwork vibrant, and the characters distinct. I still think the marketing of this series overstates its supposed lightheartedness and positivity in a major way; yes, it's set in Africa without including war, abject poverty, sickness, etc., but it's still by and large a story of working-class folks dealing with the fallout of their egregious sexual behavior (the girls' fathers are particularly shameless). Acting like the events of this series comprise the brightest and most hopeful story ever told about Africa misstates the contents of the books and isn't a very positive statement about Africa either. Rounding down to three stars for the abrupt ending; fortunately, you're most likely to read this volume as part of an omnibus, as I did, so you can move right along to the third in the series.