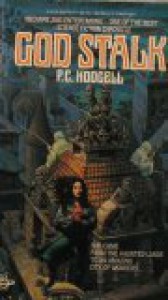 This gets 2.5 stars for “it was okay.” There are aspects of the book that I appreciate, but my reading experience was a slow one; when I take more than 3 weeks to read a 265-page fantasy novel, it hasn’t fully engaged me.

God Stalk was first published in 1982, and has evidently become a cult classic. The beginning is strong, with Jame, a warrior woman of sorts who has lost several years of her memory, stumbling into Tai-tastigon, a city inhabited by dozens of minor gods and their worshippers. Not knowing what to do next, she spends the book in the city, making friends, navigating guild tensions and trying to understand the nature of its gods.

Some of the book’s ideas are great fun: the concept of the gods, for instance, which really are otherworldly beings rather than overly-powerful humans. The city has plenty of atmosphere, and what little we see of its politics seems more realistic than your typical fantasy fare. The writing is also somewhat better than in an average fantasy book, and the book pleasant enough to read even though I rarely felt much urge to pick it up.

But while the characters are inoffensive, there isn’t much to them. In some ways Jame reads like a superhero, which could be lots of fun, but I never fully entered into her story. Many of the climactic scenes are breezed through too quickly for the reader to become immersed in the moment, and Jame’s thoughts and motivations remained unclear to me throughout. This is the most offhand use of amnesia I’ve ever seen in fiction; Jame knows she has it but barely seems to care, and it affects the story hardly at all. Meanwhile, she takes an oath as an apprentice thief despite being, as we are repeatedly told, extremely honest, honorable, and unwilling to engage in ordinary thievery; she just joins as a way to gain access to the wider society of the city. Does not compute. There’s also simply a vagueness about the character, such that who she is, and how she would think or feel about anything, never became clear to me. And the supporting cast is mostly one-note, including too many minor characters for the story being told, such that many of them run together.

Meanwhile, the worldbuilding and at times even the plot seem to assume background knowledge from the reader, as if this were a sequel to something else rather than the first in a series. I’m all for letting the reader figure out the world as she goes, but the author has to carefully construct that experience rather than dumping random bits of information willy-nilly. This is the type of fantasy novel that includes three appendices with background information, one of them all about the complicated, science-fictional ancient history of Jame’s people, which is brought up frequently in the story and which I could not have cared less about.

But there are readers who enjoy that sort of thing, and if you do, this book may be worth a shot. It’s not awful, but my interest diminished the more I read, and by the time it ended (a bit anticlimactically) I was just glad to be done. My ultimate verdict is that, while this isn’t bad enough to deserve 2 stars, nor is it good enough to merit 3.

fantasy epic fantasy 2 stars and a half