Why We Make Mistakes by Joseph Hallinan 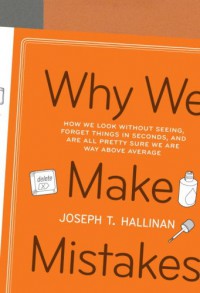 This easy-to-read book, written by a journalist, summarizes a great many recent psychological studies revealing various deficiencies in people’s perceptions, memory, and judgment. Unfortunately, its analysis is shallow, it offers few suggestions for avoiding mistakes, and its logic is all too often flawed.

1) Hallinan is familiar with many studies, which he describes in laymen’s terms and in a readable and concise manner. People need to know that we aren’t perfect: our memories are not recording devices; we don’t see everything that’s in front of us; we recall events in self-serving ways. Some interesting things I learned:

- People can’t truly multitask; instead our attention switches back and forth between different tasks. This harms our efficiency and is dangerous when driving.

- We don’t see as much as we think we do, and when interacting with people different from ourselves, often see types rather than individuals. In one small study, pedestrians were asked directions by strangers; their conversations were interrupted, during which time the stranger switched places with another person. Only half of the pedestrians noticed the change, and it went down to a third when the strangers dressed as construction workers.

- Our brains give up quickly when searching for something that’s usually not present. This is why radiologists and TSA screeners often miss what they’re looking for.

- The rates of medical error are horrifying. Always get a second opinion.

- Familiarity breeds oversight. Don’t just get a colleague to proofread an important paper; ask a family member who doesn’t work in the field.

2) It is comforting to know some of the mistakes we often make are normal, such as forgetting people’s names, or having no idea who someone is when you encounter them outside the usual context. It’s also normal to not remember exact details of things we see all the time; for instance, few participants were able to correctly place all the features on a penny.

3) Tips on avoiding mistakes (though the book contains so few that most of them are included in this review):

- If you have to memorize a stranger’s face (for instance, to identify in a lineup later), you will remember more by attempting to make judgments about the person’s character based on his/her physical features.

- We make fewer mistakes when happy, but it doesn’t take much. Watch funny YouTube videos before important tasks.

- Avoid taking advice from people whose interests are in conflict with yours. Disclosing the bias doesn’t keep them honest – in fact, it may do the opposite, because once you’ve been warned, they feel less obligation toward you.

1) This book will have you think people misremember everything, lie constantly, and are all terrible at their jobs (especially in medicine). Along with more advice on avoiding mistakes – which surely warranted more than 10 pages at the end – by the time I finished I wanted to know how we ever get things right.

2) Because the book deals with many studies quite briefly, sometimes it raises more questions than answers. For instance, it posits that we make snap judgments about people’s competence based on their facial features – but doesn’t explain what features strike us as competent so that we can try to correct for it. In another section, Hallinan recounts a study showing that teams with black uniforms are viewed as more aggressive by referees than teams in white uniforms, and are penalized more often. And that is literally all we learn about color coding. What are our impressions of other colors? Which colors are best to wear in which situations? Hallinan isn’t telling.

3) Worst of all for a science book, Hallinan’s premises don’t always support his conclusions. For instance:

- To prove that our memory of conversations is flawed, he gives the example of a politician recorded on Nixon’s tapes, who subsequently (but before the release of the tapes) testified in detail about their conversations. Unsurprisingly, there were significant differences between the testimony and the actual recording. But Hallinan attributes it all to honest memory failure, without taking into account the desire of a political figure (and one on a national stage, no less) to make himself and his allies look good. This is especially odd when a later chapter discusses self-serving exaggerations. Hallinan also focuses on insignificant discrepancies: the politician remembers Nixon asking him to sit, but the tape doesn’t include that; perhaps they’re both right, because Nixon simply gestured to a chair?

- Arguing that “the grass is always greener” and that people focus on the wrong things, Hallinan gives an anecdote of a couple who moved to California for the weather, but disliked the culture and their neighborhood, and then moved back home. He supports this with the statistic that 2.2 million people leave California every year. Without any information on the reason for those moves (I’d hazard a guess that most, like any moves, are primarily motivated by work or family, rather than disenchantment with California), that statistic tells us nothing but that the U.S. is a highly mobile society.

- When asked how many opposite-sex sexual partners they’ve had, men report many more than women, which means someone’s not telling the truth. Hallinan considers it “clear” that people simply misremember in the direction society approves, rather than lie, on the grounds that men and women are equally likely to acknowledge having had oral or anal sex, and therefore must be telling the truth to their best of their ability. Given that the median numbers reported in the U.S. are four partners for women and seven for men – numbers that should be easily memorable – honest mistakes seem unlikely to be the best explanation. A more plausible one is be that people feel more comfortable exaggerating (increasing or decreasing a number) than outright lying on a yes/no question, or that people feel less judged for the sex acts they’ve engaged in than for the number of people they’ve had sex with.

To wrap up, then: this book is a good introduction to recent studies on the fallacies of the human brain, but it isn’t without fallacies of its own, nor is it more than a surface-level compilation of studies by an interested journalist. I learned enough that it was worth my time, but I would be interested to read more on the topic from authors with a deeper knowledge of the material.