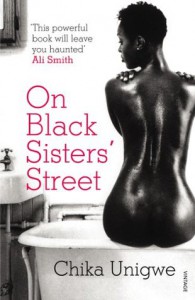 This is one of those books that hides lazy writing and cardboard characters behind a topic you can’t criticize: in this case, it’s sex trafficking. Now, if you love every book you read with tragic subject matter you should probably skip my review, but if you are looking for literary merit, then read on.

On Black Sisters Street features four women – three from Nigeria and one from Sudan – working as prostitutes in Belgium. At the beginning of the book we learn that one of them, Sisi, will be murdered; from there the chapters alternate between Sisi and the other three women, tracing their backstories and documenting their lives as immigrant sex workers.

The story moves fairly quickly, and for the first half I had some respect for Unigwe’s avoidance of the expected stories. Most of these characters go into sex work with their eyes wide open, driven by a general lack of economic opportunity rather than grand melodramatic circumstances. And while they are sex workers, they aren’t defined by sex; the depiction of their lives is in no way exploitative. The backstories get more stereotypical as they go, however, until we reach the one full of mass killing and gang rape and with a character tricked into sex work. Unigwe’s writing isn’t up to such intense material, and it reads just like every other overly violent sequence in every other book that tried to force through tragedy an emotional connection that the author was unable to build with real character development.

And the writing style leaves plenty to be desired. Witness:

“The house itself was not much to look at. Truth be told, it was quite a disappointment, really. A ground-floor flat with a grubby front door and, as she would find out later, five bedrooms not much bigger than telephone booths. The sitting room was a cliché. An all-red affair except for the long sofa, which was black and against the wall right beside the door; a single thin mirror ran from the ceiling to the rug. Sisi often thought that had she been asked to draw the room, she would have drawn exactly that, down to the mirror. The only thing she would have left out would have been the incense, which Madam burned nonstop, believing totally in its ability to rid the world of all evil.”

I won’t nitpick the grammar or wordiness (you can judge for yourself), because the larger problem is that I don’t know what this means. If Sisi were to draw the room, she would, um, draw it, but without the smell? Scents tend to get left out of my drawings, too.

Then there are the passages that make clear that not only is the author not a native English speaker, but Random House evidently couldn’t be bothered to have someone copyedit her work:

“She hoped she would never have to cry like that again for as long as she lived. She was wrong.” This was only a hope, so she wasn’t wrong; she was disappointed.

“Sisi was shown into a sardonic room with a single bed dressed up in impossibly white sheets.” Try as I might, I cannot imagine how a room might be sardonic.

But okay, most of us can forgive some stylistic infelicities if we come to know and love the characters. Sadly, these portrayals are only skin deep. Ama is the angry one. Efe is the one who speaks in heavy dialect. That’s about all there is to differentiate these women from one another. And so, for me, the worst passage is found on the last page:

“Anyone who knew Sisi well might say that she [spoiler removed]. . . . For Sisi was not the sort to forgive.”

Clearly, this reader never knew Sisi, because despite having just read a book in which she is the main character, I had no reason to believe she was malicious or prone to grudges, nor would I have predicted the action she takes. And when a book’s characters don’t come alive, all I can recommend is that you look elsewhere.