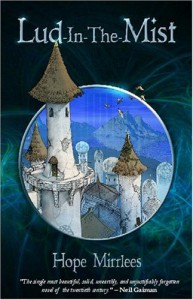 An obscure fantasy classic, if that isn’t too much of an oxymoron. This little gem was first published in 1926, then re-released in 2005 with a beautiful cover (and too many typos – I have no patience for publishers milking a dead author’s work without bothering to copyedit, even if they do have great cover artists).

Lud-in-the-Mist is set in a fictional land reminiscent of pre-industrial England; it feels like a precursor to Tolkien’s Shire. Of all the modern fantasy I’ve read, the book that feels most directly influenced by it is Jonathan Strange & Mr. Norrell. Like Strange & Norrell, this is more literary fiction than genre fantasy; there’s a political edge to Lud-in-the-Mist, and many classical references (I’m sure I missed most of them), and that forbidden, life-altering fairy fruit is certainly symbolic of something, though interpretations vary. Also like Strange & Norrell, the book deals in part with the relationship between the human world and faerie – which is neither good nor evil, but mysterious and sinister in its occupants’ murky motivations. The real world is here, too, out of the corner of your eye; though it's set in a fantasy world, the occasional reference to, say, eighteenth-century Rome, reminds readers that fantasy stories weren’t always told the way popular epics are today. The omniscient narrator – familiar with both Dorimare and our world – adds a certainly chilly distance entirely appropriate to the story.

With that, I’ll refrain from describing the plot – all you need to know can be found in the blurb – and merely say that this is a well-written, vivid little book, both unearthly and firmly grounded in reality. The characterization is solid, without clear heroes and villains; the closest this book has to a protagonist is a somewhat pompous, boyish politician, but both he and his country are changed irrevocably by the events of the book. And the ending is very satisfying. All in all, this makes an excellent adult fairy tale, recommended to those who like their fantasy novels to be good literature as well as fresh and imaginative.