Coming of Age in Mississippi by Anne Moody 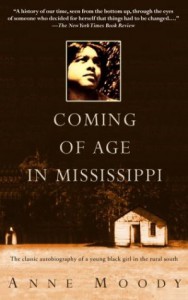 I first heard this book recommended as an alternative to The Help: a memoir about the segregated South and the civil rights movement, written by a black woman who became an activist. After reading it, I consider it an excellent alternative to all those books about the segregated South written by white people – you know the ones, with their cardboard too-good-to-be-true characters who exist to be victims. You get much more texture and nuance, a far more credible picture of individuals and their communities, from someone who came from that world than from an outsider.

Anne Moody was born to a poor family in rural Mississippi, where she grew up caring for many younger siblings and started work cleaning houses at a young age. The early part of this book is less about segregation than growing up poor – tellingly, Moody remembers exactly how much she made at every job she had, and as a teenager she had some pretty awful ones. Apparently she’s called herself an activist rather than a writer, but don’t believe it. First, even when the subject matter is mundane, her writing keeps it interesting: simple but clear and very readable, and she takes creative license in writing scenes and dialogue (this may annoy some purists, but didn’t bother me). Second, the book never feels like an op-ed piece; Moody writes about events as she experienced them at the time, so, for instance, even though later she comes to despise all the white people in her hometown, this doesn’t stop her from writing positively about early employers in the first section of the book.

In college Moody became involved with the civil rights movement, which forms the focus of the later part of the book. She participates in some sit-ins, which get ugly, but her main activity is trying to sign black people up to vote, which in rural Mississippi at the time was a dangerous occupation: the workers regularly get threats from the white community, they’re harassed by police, and for several years Moody is unable to visit home for fear of harm to her family. It’s no surprise when by the end of the book she’s burned out and disillusioned; one of the things this book shows is the far-reaching effect of even a small amount of violence and intimidation. You don’t need the KKK beating everyone up, as they do in the more melodramatic novels set in this period, to explain the system of social control that existed. Moody and others showed extraordinary courage in standing up to that system, and if some elements of her story seem foreign to us now (all right, y’all, we’re driving across the South in an integrated car! I hope we make it), it’s because of the brave people who took risks to change society. Sometimes I think we forget that the civil rights movement wasn’t just marches and the “I Have a Dream” speech (ironically, Moody was not a fan of that speech. She didn’t think the movement needed dreamers).

At any rate, I consider this memoir well worth reading, especially for Americans interested in how much our country has changed (and how much it hasn’t) in the last 50 years. It grabbed my attention right away and proved to be an enthralling read, and I’m only sorry Moody hasn’t published more since this came out in 1968; I’m sure she has more to say.